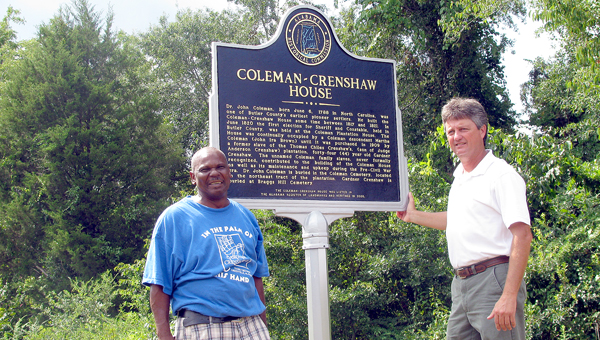 The newest historic marker for Butler County was unveiled on Saturday, recognizing one of the area’s most significant homesteads from its pioneer days. The event, honoring the Coleman-Crenshaw House took place at Mt. Olive Baptist Church. Descendants of Gardner Crenshaw and Dr. John Coleman were on hand for the special occasion, along with members of the Butler County Historical Society and guests.

The Coleman-Crenshaw House, a Federal-style house, was constructed between 1817 and 1821 by Dr. John Coleman, one of the county’s earliest settlers. The house was continually owned by Coleman descendants until purchased by a former slave of Thomas Chiles Crenshaw, 44-year-old Gardner Crenshaw in 1909.

The Coleman-Crenshaw House has been designated as a significant African-American historic site by the Black Heritage Council of the Alabama Historical Commission.

The unnamed Coleman slaves receive special recognition on the marker for their contribution to the building of the house and its maintenance and upkeep during the pre-Civil War era.