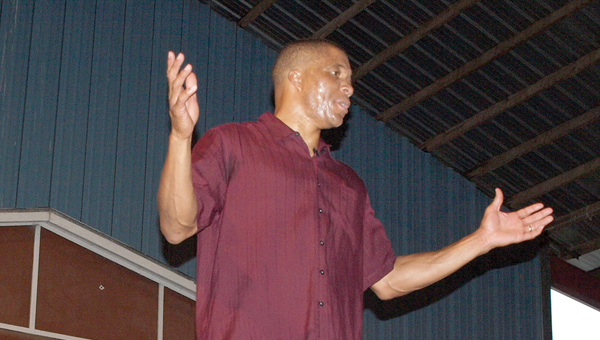 You can rise above enormous challenges and roadblocks, and become a champion in life. The two-inch scar on Jeremiah Castille’s arm, he says, is a reminder of that truth.

“My mother was drunk and one day she took a butcher knife and went after me and I still have the scar. She physically abused me and the rest of the kids. I know what it is to be poor, to have folks who drink and take drugs and end up in jail,” Castille, a former college and pro football standout, told the crowd of nearly 700 attending Friday night’s Back-to-School Bash at Hank Williams Park in Georgiana.

A member of Bear Bryant’s championship team during his college days at Alabama, Castille, who is now the Crimson Tide’s team chaplain, wanted his audience to know difficult life circumstances and dysfunctional families do not have to prevent a young person from surviving and thriving in life.

“All champions have a little attitude — but in a good way,” Castille said. “Coach Bryant used to say ‘I can tell by the way you trot onto the field whether or not you are ready to play’ . . . if you can’t get fired up, then why are you putting that uniform on?”

Castille recounted how attendance as a middle school student at a church “just down the street” proved a life-altering experience.

“I was angry, bitter and mad at life and taking out my frustrations at school. Maybe some of you are just like I was.  God knows right where you are at in your life,” Castille said.

“The greatest need all of us have is the love of God. Once you have an encounter with the Creator, you will never be the same. When he saved me, he was able to keep me.”

Castille went on to earn both scholastic and athletic scholarships to the University of Alabama where he became an All-American, later playing for both the Tampa Bay Buccaneers and the Denver Broncos. Two of his sons have played for Alabama as well as professional football, with a third starting at the U of A this fall.

“I was inspired. I was ready to do this thing. I was five feet, nine inches tall and 155 pounds. But it’s not the size of the dog in the fight, it’s the size of the fight in the dog. I said I’m gonna work hard, and I got to play some as a freshman at Alabama . . . I had a dream. And everybody’s got to have a dream,” Castille said.

“Lives can be turned around by God. He has the power to heal. The first person he gave me love for was my mother . . . today she has been sober for 26 years. I have a strong marriage, six great kids. All these things didn’t happen by accident. I believe God put me in the right places.”

Before Castille took the stage, the football players and cheerleaders from Greenville High, Greenville Middle School, Georgiana School and McKenzie School were recognized by their respective coaches.

Youth groups from Christian Life Ministries and McKenzie Baptist Church performed drama and stick ministry while Dale Brown and  the group Foretold from Danielville Baptist Church in Honoraville shared songs of praise and worship with the crowd.

“This was another awesome event,” said Butler County Ministerial Association President Allen Stephenson, who emceed for the evening. “We saw prayers answered. We recorded 98 decisions made for Christ, or for rededication, and probably another 150 who came up front and prayed during the altar call.”

This was the eighth annual Back to School Bash, a non-denominational event organized by the county’s Christian youth ministries, Stephenson said.

“It is truly a community and county event, and we give thanks to a lot of businesses and churches who provided us with financial support.”