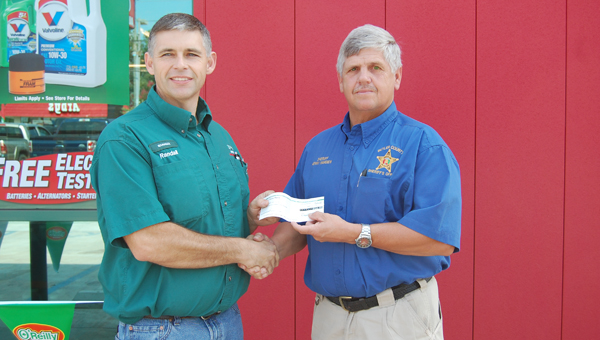 It’s a purchase that most people will never see, but could save the life of a Butler County Sheriff’s Deputy.

According to Butler County Sheriff Kenny Harden, the BCSO has purchased nine new vests – enough to outfit all of the department’s deputies. The cost for vests, which must be replaced every five years, was $6,000.

The department’s old vests would have hit the five-year mark in October.

“We were able to get them replaced a little early, which is good,” Harden said.

The purchase was funded by the proceeds from the Butler County Sheriff’s Rodeo and donations, such as a $200 donation given by O’Reilly Auto Parts on Wednesday.

“We felt like the Sheriff’s Office was a good thing to donate to and a way we could help the community,” O’Reilly Auto Parts manager Randall Powell said. “We’re just happy to be here and be able to help.”

Harden thanked O’Reilly Auto Parts for donating money toward the purchase of the vests.

“With the money from the rodeo and this donation, we won’t have to pay for the vests out of our budget, which really helps,” he said. “I think it’s great that O’Reilly (Auto Parts) wanted to help out. They just got here and I think this shows that they are going to support our community. This donation will help keep our deputies safe while they work.”