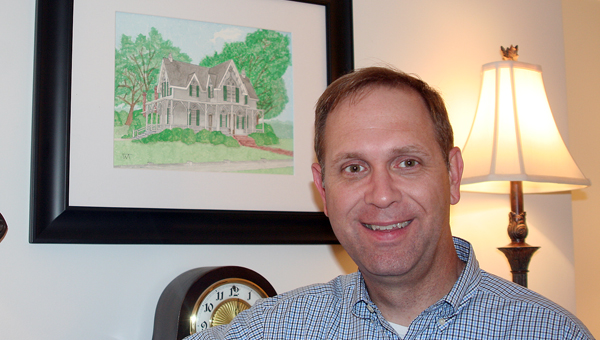 Walt Autrey poses with his painting of the Buell-Lane-Sherling home on Fort Dale Road.

He’s a native son with deep roots in the community. Now Walt Autrey is preserving some of the area’s most historic and beautiful structures for posterity with paint and paper.

Autrey, who currently lives in Vestavia Hills with his wife, Charlotte, was born in Greenville and spent part of his childhood in Elba before his family’s return to the Camellia City in his early teens.

“My cousin and I used to spend our childhood summers with our grandmother in Greenville. She would read to us out of Little’s 1885 History of Butler County. We were fascinated by the Indian and pioneer stories,” Autrey said.

“On Sundays, they would drive us out to Forest Home, Monterey and The Ridge to show where all that history happened. All my ancestors from the early to mid-19th century were from Butler County, so it’s my history, too. Those are sweet memories.”

Autrey’s life-long love of history and historic buildings led him to undertake a book project a decade ago.

“I wanted to write a book about the historic homes of Greenville but struggled with how to illustrate it. Photographs capture everything—utility poles, hydrants, chipping paint—and some of the houses were in poor condition or simply gone. So I stopped,” he explained.

Last September, with his mother very ill from cancer, Autrey hoped to find someone who could do a drawing or painting of the family home as a special gift.

“We had a new manager at the bank, Pam, who was also an artist.

“She said she would help me do a painting, because it would mean so much more to my mother if it was my work,” Autrey said.

And so began his lunchtime painting lessons with Pam.

“That was a difficult time for me. Pam’s coming to our department was definitely God’s timing and such an unexpected blessing, too,” Autrey said.

With his newly discovered painting skills under his belt, Autrey began to document the historic structures of Greenville once — only this time, in watercolors rather than on film.

“After painting a couple of family homes, I made a list of 38 buildings in and around Greenville and I started painting,” Autrey said.

“When I find vintage photographs of a building, I will paint it in that condition, which is going to be much closer to its original condition than a modern photo. I may never own a historic home of my own to restore, but in a different way, I preserve far more of them on watercolor paper.”

He has and is “restoring” buildings lost to fire and the ravages of time, such as Halso Mill on Pigeon Creek, the Womack Plantation Home on The Ridge and The Palings near Ft. Dale Cemetery.  Greenville’s downtown gem, the Ritz Theatre, is another work on progress for the artist.

Autrey still hopes to create that book on Greenville’s historic structures, illustrated with his own watercolor renditions of the buildings.

“It’s a long-term goal, but I’m having a great time getting there. It’s been a particular joy to bring several ‘lost’ homes back to life. And there’s more to come.”

To learn more about Walt Autrey’s watercolors of historic Greenville and Butler County, email him at theautreys4@bellsouth.net .