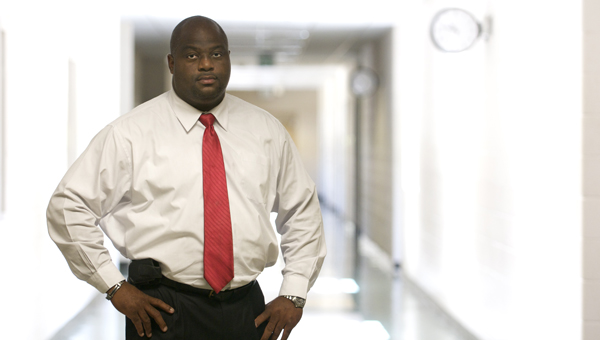 When Greenville High School opens its doors for the 2011 school year, it will have a new principal roaming the halls. Jospeh Dean, who most recently served as principal at Georgiana School, was named GHS principal at the Butler County Board of Education’s July 21 meeting. (Advocate Staff/Ashley Vansant)

He’s served as an assistant principal at Greenville High, principal of Georgiana and interim superintendent of Butler County Schools.

Now Joseph Dean is taking on the challenge of helming the county’s largest high school.

As Greenville High’s new principal, Dean says he is planning to do plenty of looking and listening in the opening days of school.

“That’s not to discount advice I have received. But I think in order to be fair to the people you serve and the profession you work in, you have to observe for yourself, develop your own opinion and create a plan from there,” Dean said.

“You don’t want to start making a lot of changes, like some fruit basket turnover, before you are really sure of what you are up against.”

Known for his ability to maintain discipline, Dean says a strong disciplinarian is in part born, not made.

“I think to a certain degree it is something you are born with. You either have it, or you don’t,” he said.

“That doesn’t mean you can’t learn and hone your skills in the area of discipline. But it’s easier if you start out with that ability. … I also received plenty of discipline when I was growing up.”

As for any successes achieved at Georgiana School, Dean is quick to point out he is not the one who deserves credit.

“Sometimes I think principals are kind of like quarterbacks — they get too much credit. It’s up to the parents, the teachers, the students and the community,” he said.

To be a good principal, Dean believes you have to know what quality instruction looks like, with teachers able to be confident in the principal’s ability to lead.

He also believes when it comes to problems within the school, the buck stops in the principal’s office.

“You must be willing and prepared to take responsibility for whatever happens inside that building,” Dean said.

While he has served as assistant principal in the past at GHS, he says the duties are so markedly different for the two jobs, his past experience in the subordinate role isn’t going to be of great help at his new principalship.

“However, having been in this system for several years now in several different positions, I can say I have an advantage over someone new to the community and county. I know these people well; I know the system well,” Dean said.

“I have to say I am really excited about this coming school year. I feel like if God has seen fit to put me in this place at this time, I am not going to look back.”