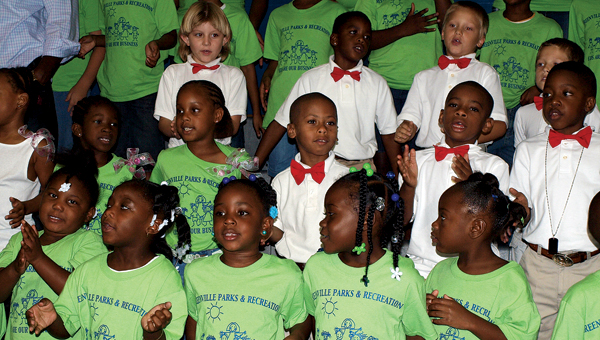 The 125-plus day campers at Dunbar become a mass choir, performing “I Believe” as an inspirational opening for their end-of-summer program. Thursday night. (Advocate Staff/Angie Long)

A celebration with song, dance, poetry, drama and some words of wisdom served as the finale for Dunbar Day Camp’s annual End-of-Summer Program.

There was a packed house Thursday night at the recreation center as hundreds gathered to see and to share the fruits of the young campers’ summer.

“Don’t be a whiner . . . we all have choices we have to make in life. Make good choices,” encouraged Chapman.

“Use your brain and trust your instincts.”

The children and youth involved in the program all had an opportunity to shine as they performed for family members and special guests.

The day campers, who ranged in age from four to 15, sang a spirited version of “I Believe” to kick off the evening and provided an exciting grand finale with an energetic group dance.

The four and five-year-old campers showed off their newly acquired sign language skills by signing the chorus of “Love in Any Language,” while the six and seven-year-old girls proved pretty in shades of pink as they performed a ballet routine to “Black Butterfly.” The eight to 12-year-old campers danced to “Move Your Body.”

The audience appeared delighted by the sight of the six and seven-year-old boys dressed in caps, white shirts and red bow ties, performing a lively jazz dance to the tune “YO (Excuse Me Miss”).

The oldest group, ages 10 to 15, gave a Readers’ Theatre performance of the humorous folk tale, “The Master Man.”

Students also shared brief bios of several talented and inspirational Americans, including First Lady and health advocate, Michelle Obama; dancer Katherine Graham; the first well-known African-American poet, and the man after whom the center is named, Paul Dunbar; deaf-blind advocate for the handicapped, Helen Keller, and dancer/choreographer Bob Fosse. Campers were encouraged to strive for a healthy lifestyle with nutritious snacks and lots of activity.

“You see all this dancing? That’s how we got them to exercise every morning. They don’t want to do the regular kind, but they certainly will dance,” said Harris with a smile.

Arts and crafts displays of the campers’ work were placed throughout the center.

“I appreciate everybody’s hard work this summer. You know, there are several day camps going on around town. We are so glad you chose to come here to Dunbar,” said Harris.