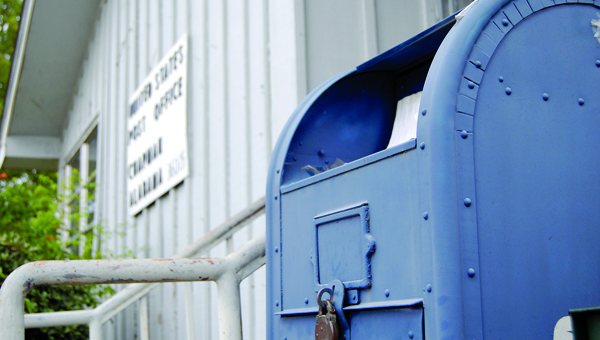 The United State Postal Service announced Tuesday the possible closure of 3,653 post offices nationwide. Among those being considered for closure is the Chapman Post Office. (Advocate Staff/Andy Brown)

Among those being considered for closure is the Chapman Post Office. The announcement came as no surprise, since the Postal Service announced plans last January to shut down thousands of stations and branches as a cost-cutting measure.

“The Postal Service of the future will be smaller, leaner and more competitive and it will continue to drive commerce, serve communities and deliver value,” Postmaster General Patrick Donahoe said.

The closing of the Chapman Post Office would deal a blow to the small community located between Greenville and Georgiana along Hwy. 31.

“People in the surrounding areas all around here get their mail at this post office,” Chapman Postmaster Janice Dean said. “It would certainly impact them.”

It would also impact a trio of businesses located within just miles of the post office. Coastal Forest Products, Corley Land Services and Evergreen Forest Products all use the Chapman station, according to Dean, who has served as Chapman’s postmaster since 1988.

“(The post office) is real accessible to all three of those businesses,” she said.

Most of the post offices being studied for closure have so little foot traffic that workers average less than two hours of work per day and average sales are less than $50 a day, according to the Postal Service. The closings are expected to begin within the next four to six months, with the first closing by January.

Donahoe estimated that the savings from the closings could be as much as $200 million.

The closings could cost the jobs of about 3,000 postmasters, 500 supervisors and another 500 to 1,000 clerks, according to the Postal Service, which currently has about 574,000 employees.

Dean is unsure of the Chapman stations chances of surviving the cuts.

“I guess it depends on what they look at with this study,” she said. “I do think the amount of people we have come in and the amount of business is reason to keep it open. It would help if our P.O. Box revenue picked up some. I just don’t know. We are close to Greenville and Georgiana.”

Donahoe has said even with the downsizing the Postal Service will try to preserve local town identities by maintaining their names and zip codes, and continuing to deliver that mail through other nearby facilities.