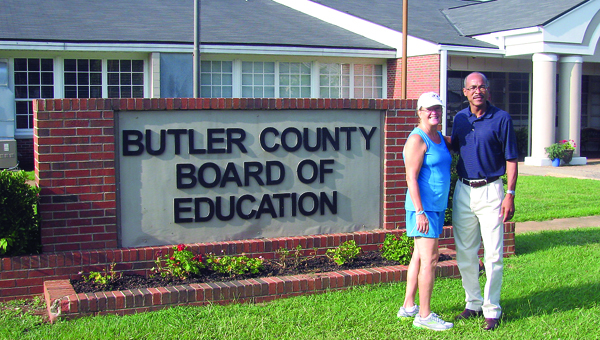 Lori Tippets, a school board member with the Jacksonville City Schools, poses with Butler County Schools Superintendent following her six-mile run in Greenville on Monday. Tippets is running in 30 cities across the state to raise awareness about the lack of funding for public schools.

Lori Tippets isn’t one to sit around and complain.

She’s a woman of action.

When Tippets, who serves on the Jacksonville City Schools Board of Education, became concerned about the funding, or rather lack of funding, for education in Alabama, she decided she had to do something.

So, she began to run.

The mother of eight is zigzagging her way around the state running six miles a day in various cities as part of a campaign called “Strides for Schools.” The goal is to raise awareness about the “plight of Alabama’s schools.” Tippets plans to run in 30 cities across the state, finishing in Montgomery on Aug. 3.

On Monday, Tippets pounded the pavement in Greenville, the 23rd stop on her tour. She circled the Butler County Courthouse, and passed by the Greenville-Butler County Public Library and W.O. Parmer Elementary School before finishing her run at the Butler County Board of Education building on Ogelsby Street.

“I got the idea to do this from a couple of other runners,” she said. “Croix Sather ran 100 marathons in 100 days and on day 68 he came through Anniston. Another runner that inspired me was Dean Karnazes. He ran 50 marathons in 50 states.”

Tippets isn’t running marathons, but the six miles she covers a day is symbolic.

“I was at a board meeting in May and we were talking about cuts,” she said. “Right then I decided that was enough. Something had to be done to make the public more aware of the plight of our schools. So, I decided to run. I chose six miles because I was running three to five miles a day already. I wanted to do something outside of my comfort zone, because I’d like to see people do something outside of their comfort zone to help fund our education system.

Tippets hopes her running will raise awareness about the struggles Alabama’s teachers face.

“We have such great school systems in Alabama, but they lack the funding they really need,” she said.

“My heart goes out to the teachers who spend money out of their own pockets to buy supplies because the school systems can’t afford them. That’s troubling. We have some great teachers with great ideas, but we just don’t have the funding they need.”

According to Tippets, her youngest child hasn’t even been afforded the same education opportunities as her older children because of cuts that resulted due to a lack of funding.

“Rather than progressing, we are moving backwards in terms of what we offer at our schools,” she said. “Our students deserve to have a quality education.”

And so, Tippets will run.

“On the back of the shirt I wear when I run it says, ‘Going the distance for Alabama’s education,’” she said. “That’s what I’m trying to do.”