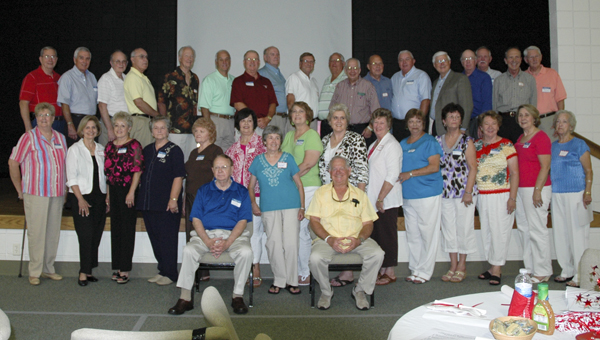 Luverne High School’s Class of 1961 celebrated its 50th class reunion the weekend of June 10-11. They met at The Pines restaurant in Troy for a dutch dinner Friday night.

There were 22 class members present. A night of memories and anticipation for the next day were the topics that night.

The class met at the Dei Center Saturday for a catered meal, program and a tour of the LHS facilities.

Mike Moody planned the program for the day. The class prophecy was read, an original work done by the class in 1961, and music from the class’s twelve years at Luverne was the highlight of the program.

Sam Windham, class president, welcomed the class and their guests as well as three teachers from their school years.

Maratha Lynn Davis Ellis gave a short memorial service for the deceased members of the class.

After lunch and the program, several class members toured the LHS facilities to see the many changes that had taken place on the school campus since May 1961.

Some 34 class members were present for the luncheon. Members came from Texas, South Carolina, Florida, Tennessee and Georgia, as well as from several counties in Alabama.

The class will meet the second Saturday in June at the Chicken Shack for lunch.