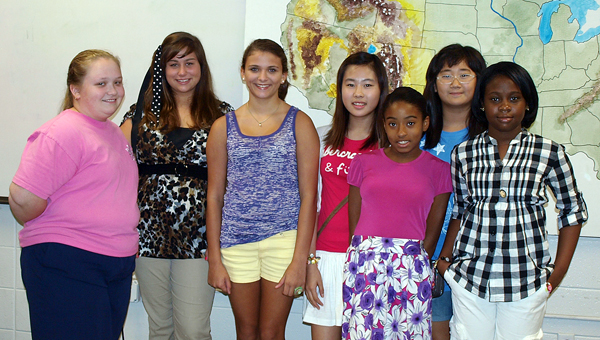 This summer, several students enjoyed learning about their land from California to the New York Island, from sea to shining sea — thanks to a summer enrichment class offered at Greenville Middle School through a 21st Century Grant.

There was the creation of a large Alabama map with all waterways marked and topographical detail added and another detailed map of the continental U.S. plus Alaska and Hawaii.

They also learned about all of Alabama’s 67 counties.

“Mapping and charting is a great way to reinforce math skills for these students.

“And we know geography skills have really decreased in our country, so we are also making sure these students know about their nation,” said veteran educator W.S. Godwin, who, along with educator Marcus Burkett and volunteer Nancy Idland, worked with the group this summer.

This week, the students each gave a PowerPoint presentation about a U.S. state of their choice, including both states visited and states they hope to visit one day, sharing fun facts and photos from their states.  While the students were already familiar with PowerPoint, Burkett gave them additional advice on use of different fonts, importing photos and using effects to make their presentations more professional.

Field trips were a part of the program, including a visit to the Montgomery Museum of Fine Art and the State Archives and a trip out to Cambrian Ridge to the driving range, with more math utilized to determine distance of golf balls hit.

While the students said they enjoyed learning about Alabama and all the states, each had her own particular favorites.

“I really liked painting and the collages — and playing golf, since my ball went the longest distance,” Emiley said with a grin.

“I liked the history, math, making the maps — and the fun that went with the learning,” said Ashlyn Langford.

Erykah Purdue said she particularly enjoyed painting and “learning all about the U.S.”

As for Keyantae Walton, “well, I just really enjoyed everything,” the youngster said.