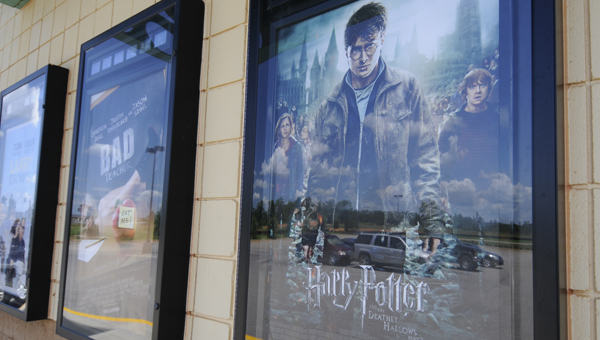 The final installment of the Harry Potter series, “Harry Potter and the Deathly Hallows Part 2,” grossed $168 million nationally during its opening weekend.

The final installment of the Harry Potter series, “Harry Potter and the Deathly Hallows Part 2,” had movie patrons lining up hours before the midnight showing last Thursday.

“We had our two largest auditoriums open for the midnight release,” Nimmer said. “It was crazy how many people came out.”

The majority of moviegoers, Nimmer said, were the “hardcore fans.”

“They were all dressed up, some with capes, some with wands and then lots in Harry Potter glasses,” Nimmer said. “A lot of these people literally grew up with the Harry Potter series and this was a huge event for them.”

Nimmer said that he even had some local business people come out to the midnight show, despite having to get up on Friday for work.

“I had people tell me they came home from work on Thursday, then slept until right before the show so they could catch it,” Nimmer said. “Its amazing how certain movies end up generating such fan interest. If you would have told me we would have had this kind of turnout from a midnight show when we first opened, I would not have believed you.”

Since the Edge opened four years ago, Nimmer says a lot of the same fans have been coming back for every show. Some of the devout Potter fanatics even purchased tickets for multiple viewings of the final movie before they saw it for the first time.

“Some came and purchased their midnight tickets, and then the 7 p.m. showing Friday and even Saturday right then,” Nimmer said. “And it was these same people that came back for those other showings.”

Nimmer passed along praise for whoever was responsible for signing J. K. Rowlings to Warner Brothers.

“You are looking at one of the largest movie franchises in the history of movies,” Nimmer said. “Its right up there with Star Wars and James Bond. Few movies ever get to that level.”