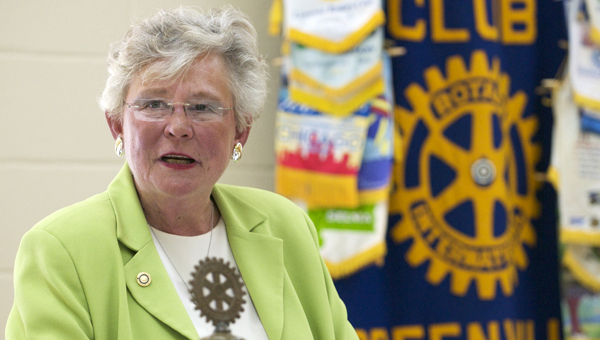 Lt. Gov. Kay Ivey brought both state political news and praise for local residents when she came to the Camellia City on Thursday to speak to Greenville Rotarians and their guests.

Ivey, herself a member of the Montgomery Rotary Club, said she saw many familiar faces in the audience.

A childhood friend of fellow Camden native William Johnson, who introduced Ivey as “someone who had always been a leader,” the lieutenant governor spoke of the contributions to community and state made by several individuals.

“I see some treasures here . . . your mayor, Mayor Dexter McLendon, who has worked so hard in the area of economic development for this area,” said Ivey.

“Eric Cates is another treasure. He served in the House of Representatives and he was a true statesman, the sort where his handshake was as good as a contract, and his word was bond.”

Ivey remarked on the contributions made by Rep. Charles Newton and District Judge Terri Bozeman Lovell, praising their conservative values and dedication to their offices.

Ivey also spoke highly of the program chair for the week, Bill Bates.

“Mr. Bates is a fine businessman, a strong conservative and a leader in his community . . . we need effective citizen leaders at our local and regional levels, and I thank all these people for their friendship and their leadership,” Ivey said.

Ivey, who discussed the accomplishments of the House and Senate in recent months, said she was proud of the “unusually high” number of results from the session and believed state leaders had made an effort to communicate and stay on the same page even when disagreeing.

“I encourage all of you to stay engaged with your house and senate members and constitutional officers. To use a football analogy, It’s been a good first quarter. Now let’s see how the rest of it goes,” said Ivey.