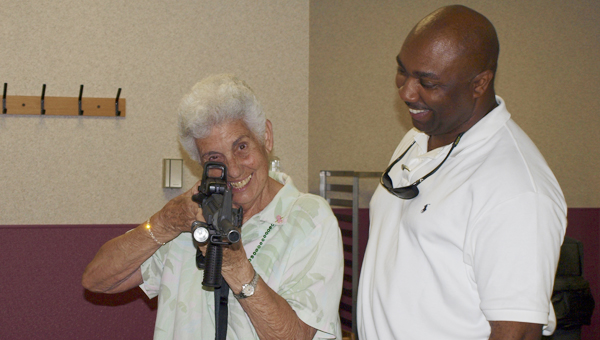 Don’t purchase a gun you aren’t willing to use. Learn how to use it properly and keep in practice. Keep it loaded in a safe but easy-to-access place.  Realize you often won’t have the luxury of time when confronting a burglar or would-be assailant.

Those are some of the tips Cpt. Randall Courtney and Lt. Byron Russell of the Greenville Police Department shared with members of L. V. Stabler Memorial Hospital’s “Healthy Woman” Program during a seminar on gun safety Tuesday night.

Bringing an array of guns from their own personal collection and some of those used by the GPD, the officers discussed the pro and cons of the various weapons and gave advice on choosing the right gun for self and home protection.

“Ladies, I would say don’t get a gun you won’t carry with you. You want something small and lightweight enough to keep in your purse  . . . you must be willing to use it or it can be used against you. The bad guy will take advantage of that weapon,” Courtney said.

“A smaller gun may not shoot as far, but it’s easier to carry and to handle and it will do the job.”

Courtney recommended shooting at least 50 rounds per month to stay in practice with a gun.

“You want to keep it clean and oiled and it should work fine for you,” said Russell. “Most malfunction problems come from people not keeping their guns clean and ready for use.”

Healthy Woman members had the opportunity to sign up for a daylong gun safety class, including four hours of instruction in the classroom and an additional two hours in the afternoon getting a chance to shoot various guns on the police firing range.

Healthy Woman is a free program which meets monthly at 5:30 p.m. in the L.V. Stabler Memorial Hospital dining room. August 25 is the date of the next meeting, with “Autism” as the scheduled topic