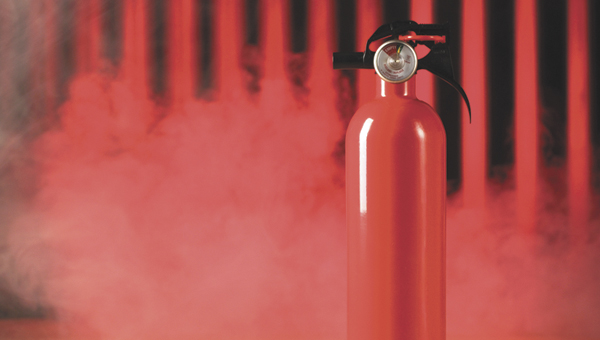 A fire extinguisher should be kept in the kitchen, but never right next to the stove.

Where should you keep your kitchen fire extinguisher? What’s the best type to have? And how long will you have to safely get out of a house on fire?

These were some of the issue addressed by Les Liller of the Greenville Fire Department during a presentation on fire safety at July’s Healthy Woman meeting.

Most house fires start due to unattended cooking, Liller said. However, that doesn’t mean you should keep your fire extinguisher right by the stove.

“It should be on the other side of the kitchen away from the stove. If you think about it, once a grease fire is underway, it might be pretty hard to actually get to the extinguisher without burning yourself,” Liller said.

The fire fighter recommends the ABC type of fire extinguisher for homes.

“This type will take care of paper and wood, flammable liquids and electrical fires, so it is a good all-purpose extinguisher to have on hand,” Liller said.

He advised using the PASS method for the safest use of the equipment.

“Remember to pull the pin out, aim the nozzle at the fire, squeeze the top down and sweep it back and forth,” Liller said.

Once you’ve used the extinguisher, it’s important to exit the room quickly, he said.

“Most fire extinguishers coat the molecules in the air so the fire cannot use them. But that means you can’t either, so get out of there and call 911. Even if you think you have put the fire out, we can come and check and make sure it hasn’t spread to any ductwork,” Liller explained.

If the fire has already become too involved, “just get out of there,” he advised. “The fire extinguisher is not going to do much good in that case. And never underestimate how quickly a fire can spread.”

Liller advised each family to have a plan of escape, including a pre-determined meeting place, and to periodically rehearse it.

Those with second-story bedrooms or apartments were encouraged to get emergency drop ladders to keep in place at the windows.

And by all means, keep those batteries in your smoke detectors working.

“In many cases, people die of smoke inhalation while sleeping before the fire ever touches them. Smoke detectors give you an edge by waking you up and giving you a chance to escape,” Liller said.

And keep it low when moving through a smoke-filled house, Liller said.

“It gets much hotter the higher up you are, so crawling is the best way to protect yourself. It’s easier to see and breathe close to the floor, also,” the fire fighter advised.