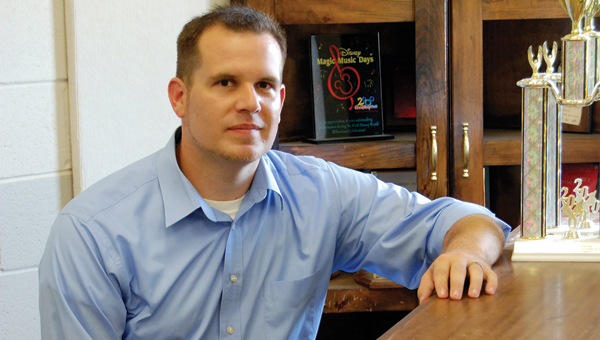 Jason Tucker knows how to build a band program.

Tucker, the new band director at Greenville High School, has spent the last seven years doing just that at Andalusia Middle School, where he served as band director.

“Recruitment is my strong suit,” said Tucker, an Andalusia native.

“We started with 60 band students in a school of 400 in Andalusia, which is pretty typical, but we knew there was more potential,” Tucker said.

At the end of his seven years with AMS, the band program had grown to a total of 203 students, 51 percent of the school’s enrollment.

“We had kids who were involved in other activities, such as sports, but for a lot of the kids, band was all they ever did in terms of extra-curricular activities,” Tucker said.

“If you can get students excited and involved in music and band, then you give them another reason to want to come to school each day.”

And that, says Tucker, is just what he wants to do here in Greenville.

“I will modify my recruitment efforts to better work with the high school, but I am definitely excited about the prospect of continuing to build on the good work (former GHS band director) Chris MacMillan did here over the last couple of years,” Tucker said.

“My wife and I have already had lunch with the middle school band director Chris Pryor and his wife and discussed getting more students involved in the feeder program at GMS. I’m excited about getting to work with Mr. Pryor and building an even stronger program.”

Tucker, who started taking piano lessons at age 12 and later joined the school band, started out his college years torn between choosing a career in math, architecture or music.

“I was performing as a part of the LBW Ensemble and we went to a lot of schools to sing, including schools that didn’t have any type of music program — no outlet for those with musical interest and talent,” Tucker said.

“That experience is what made me decide to major in Music Education at Troy. I wanted to teach music and share what I love so much. And I have never regretted that decision.”

In terms of instruments, Tucker considers himself first and foremost a pianist.

“I am a percussionist, too, but the piano is my first love.  I write a lot of things off the radio, creating new arrangements that are musically challenging for the kids, but also something the kids listening to the band will recognize,” he said.

“Creating a contemporary radio show is a way to hook the kids already in the band into loving it and enjoying all the more, and a way to get more kids interested in being in the band, I’ve found.”

Tucker said he and wife Jessica, who was selected as Teacher of the Year at Andalusia Elementary last year, are on the brink of completing their master’s degrees. They have a four-year-old son and a two-year-old daughter.

“We are really enjoying Greenville so far,” Tucker said.

“We’ve gotten to meet several parents of band members. Everyone—not just the people at school, but out in the community as well — have been so welcoming and nice. I am looking forward to a great year at the high school.”