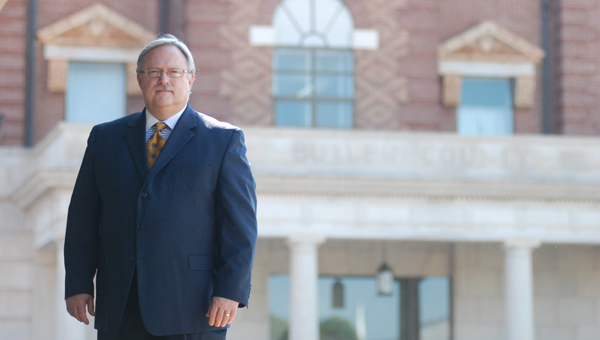 Circuit Clerk Allen Stephenson has been in office for 17 years. He will not seek re-election in 2012. (Advocate Staff/Austin Nelson)

Allen Stephenson, who has held the office for 17 years, announced this week he will not seek re-election in 2012.

“I’ve loved this job. I’ve never woken up and dreaded going to work. The reason I sought it out in the first place was the need and urge to be of service to the community and to do the right thing for my family,” said Stephenson.

It’s never been about money for him, he says.

According to Stephenson, he took a 50 percent cut in pay at the circuit clerk’s office compared to his previous employment with Liberty National Insurance.

“After 17 years, I am just now earning what I did in my last year with Liberty National. My primary motivation in seeking the office was certainly never the salary,” Stephenson said.

Now, he is ready to devote himself more fully to his “other jobs,” that of pastor to two churches, Mt. Pisgah Baptist and First Baptist Church of Georgiana.

“My main reason for leaving is my churches. I want to be able to serve them as a true full-time pastor,” Stephenson said.

“Serving both churches has gotten harder and harder with my schedule and I could easily spend all my time at one church and stay busy. Also, we had a major remodeling at Mt. Pisgah and built a brand new church in Georgiana. I am hoping I can stay long enough at both churches to see them debt-free.”

Stephenson said the negative impact the long economic downturn had taken on the state’s court system was being keenly felt by Butler County, and situation was likely going to get worse before it gets better.

“We’ve seen our case load increase by 70 percent in the last five years. I’ve had to lay off people, and that is never, ever easy,” the circuit clerk said.

“Everything is going to be backed up on the dockets.

“All civil cases will have low priority; we have to give the criminal causes high priority. A lot of people will be unhappy.”

Stephenson added, “It’s not the Legislature’s fault, either. There just isn’t enough money.”

In other words, whoever steps into Stephenson’s shoes in early 2013 will need to be prepared for a tough road ahead.

“I will also say this is a position of public trust. Four million dollars goes through this office every year and the clerk is responsible for accounting for every penny of it,” he said.

In terms of any possible candidates for the next term in office, Stephenson said the only person he promises to “support” is Gina, his wife, with whom he plans to enjoy the couple’s children and grandchildren.

“I have to and I will stay neutral in terms of who will be running for the office,” he said.