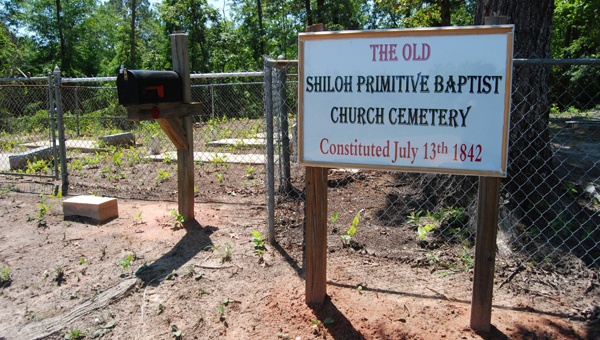 The Shiloh Primitive Baptist Church Old Cemetery has been around since 1842. (Advocate Staff/Austin Nelson)

The Old Shiloh Primitive Baptist Church Cemetery has been around since 1842, and as can be expected, time has taken its toll on the site.

Thanks to the efforts of Oscar Thomas, however, the cemetery is looking better than it has in years.

Thomas, 80, did a lot of the work last winter, while the weather was cool enough for the sort of physical labor it took to clear years of neglect and disrepair.

“If you want to know what it looked like before hand, just look at the woods around it,” Thomas said. “Half of the fence surrounding it had collapsed, where a tree had fallen on it.”

One and a half loads of debris and three burn piles later, the grounds were cleaned up. Then, Thomas worked to repair the fence and added a new sign out front.

“I sealed it up with Plexiglas in the front in back, so hopefully the water won’t get to it,” Thomas said. “And one day, when the Plexiglas glass starts to yellow, it can be replaced.”

Thomas said his great-great-grandmother is buried in the cemetery along with “the true pioneers of Butler County.”

“A lot of the folks around here are descendants of those that are buried in that cemetery,” Thomas said. “I wanted to get it cleaned up before I go too.”

Thomas didn’t want to take all the credit for the work, however.

“Phillip Crutchfield brought his tractor out here and helped me pull stumps and clear debris,” Thomas said. “He played an important role.”

This winter, Thomas plans on returning to cemetery to finish what he started.

“I about got it whipped,” Thomas said, with a chuckle. “But I still have a little more work to do.”