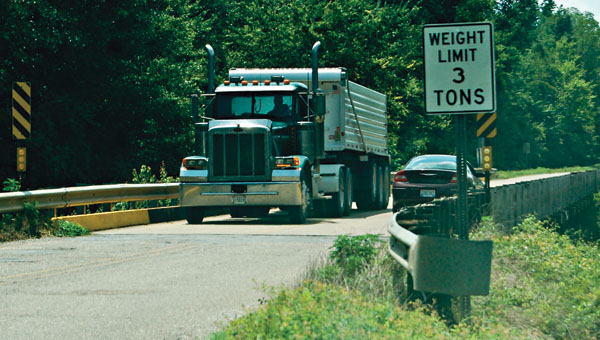 A semi-truck crosses the Honoraville Road at Little Patsaliga Creek.

Many bridges around the county have gotten an eye-catching addition in recent weeks: some yellow stripes along the curb.

Those marked bridges are part of “Project Yellow Bridge,” a campaign launched by the Crenshaw County Highway Department to make residents more aware of weight-restricted bridges.

Some 34 bridges in the county are weight restricted, and 25 of those are in such bad shape that an empty school bus can’t legally or safely cross them.

“People have just gotten so used to seeing the posted weight restriction signs that they don’t notice them anymore,” said county engineer Benjie Sanders. “We’re trying to get people to be more aware and ask why the bridge has yellow on it.”

The idea came from a statewide meeting of county engineers, but Sanders said it isn’t part of a widespread program.

“We’re one of the first to do something like it,” he said.

Of the 34 restricted bridges, 17 are rated for six tons or less.

That means that most everything larger than a car or pickup truck would exceed the weight limit, Sanders said.

Many of the restricted bridges are on dirt roads, but Sanders also said that doesn’t mean there’s no economic impact on the county.

“We’ve got a situation where there are 80 acres on a dead-end road that can’t be clear-cut because a log truck can’t pass over the bridge,” he said. “There are also areas that can’t be approved for poultry farms because chicken trucks can’t get there.” 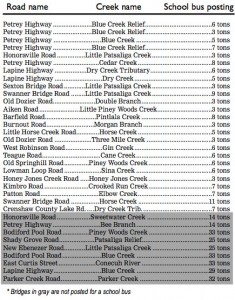 One of the biggest areas of impact is on the school system.

According to the Alabama State Department of Education, there are 199 bridges across the state that school buses must detour because of weight restrictions.

“Most of the restricted bridges have timber sub-structures and were built in the 1940s and ‘50s,” Sanders said. “We’ve been addressing bridge problems as aggressively as possible over the last 10 years.”

The Association of County Engineers of Alabama estimate that it would cost $1,127,049 annually for Crenshaw County to replace bridges on a 50-year cycle.

Sanders said that the county doesn’t have the money or the resources available to replace the bridges, but they will do so as it becomes available.

“We’ve applied for two rounds of grants, but we didn’t receive either of them,” Sanders said.

Though money is still scarce, Sanders said the highway department is taking steps like launching Project Yellow Bridge to make citizens more aware of the problems facing the county.