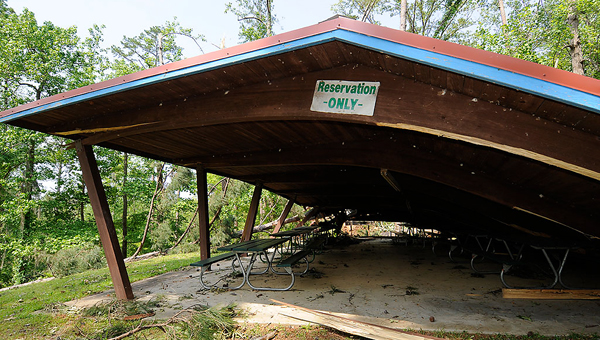 An April 15th tornado flattened buildings and knocked down trees at Greenville’s Sherling Lake Park. It took the City of Greenville more than two months to complete the cleanup process. (Advocate Staff/Ashley Vansant)

More than two months after a pair of tornados tore through Butler County, snapping trees and flattening buildings at Greenville’s Sherling Lake Park, the cleanup process is nearly complete at the park.

“We’ve just about got it all taken care of,” Mayor Dexter McLendon said. “Now we’re just waiting to see if we’re going to be reimbursed for the cleanup.”

At its June 20 regular meeting, the Greenville City Council approved a $111,644.25 payment to Bryan Tree Service for debris removal at Sherling Lake Park.

City officials are still waiting to hear how much, if any, of the money the city spent will be reimbursed by FEMA. According to McLendon, city workers documented the cleanup process with photographs, but some necessary paperwork was not completed at the time of the cleanup.

“We took the pictures to show what we were really doing, but no one told us what paperwork needed to be filled out,” McLendon said. “We just got it cleaned up the best we could. We probably could have had a logger come in and do it quicker than we did, but we wanted to take our time and make sure that we keep Sherling Lake a beautiful place.”

According to McLendon, the city is also waiting to hear if it will receive a grant from the Alabama Department of Economic and Community Affairs. The grant money would be used to plant replacement trees at the park.

“They would be small seedlings, but you have to start somewhere,” McLendon said. “We’ve lost a lot of trees out there over the years when storms have come through and we just want to replace as many of them as we can.”