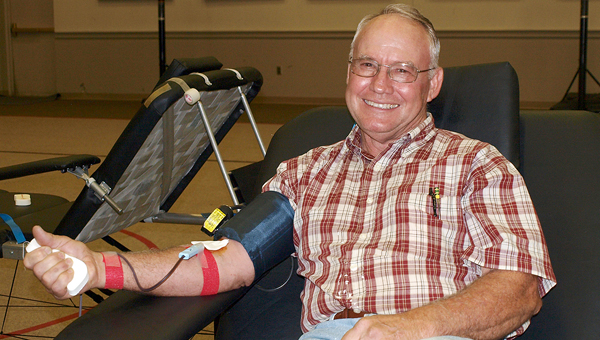 Local business owner Ronald Burkett is a cheerful giver as he donates the gift of life during Butler County’s Biggest Blood Drive. Burkett said he regularly donates at blood drives and wanted to help the county meet its goal at the drive. (Advocate Staff/Angie Long)

Butler County not only met, it exceeded its goal at Thursday’s Red Cross Blood Drive held at First Baptist Church in Greenville.

And it proved to be just that.

“We had 35 people to present on Thursday, which is the most people we have ever had show up to donate blood here in a single day,” Jefferson said.

While all did not turn out to be eligible donors, 26 did, beating the goal of 21 pints set for the event.

“We are so pleased at the turnout and the results and want to thank everybody — volunteers, donors, workers — who played a role in making this a success,” Jefferson said.