ALDOT asks for input on bypass 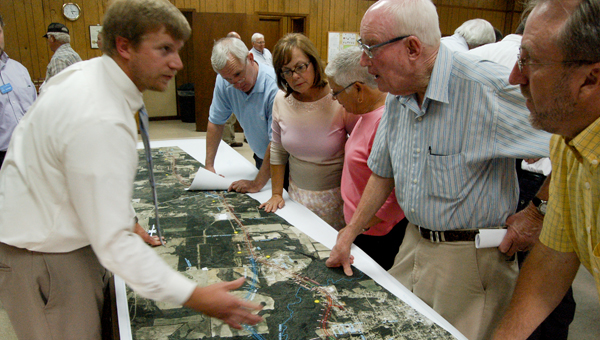 A map showing several proposed Highway 331 bypass routes for Luverne was on display at the Furman G. Mitchell Multipurpose Center on Tuesday night, and hundreds turned out to get a look at the proposition, have questions answered and voice an opinion.

The map showed a satellite image of Crenshaw County from Fuller’s Crossroads to just south of Luverne, and three alternate routes were proposed.

From Fuller’s Crossroads to just south of Airport Road, the only difference between two of the proposals involved the construction of a new lane.

In one proposal, the new lane was built on the east side of the current highway, while on the other, it was constructed on the west side.

The biggest difference occurred where a third possible route comes into play just north of the intersection with Highway 10.

This is a photo composite of the ALDOT proposal map. Click to enlarge.

While the red and orange color-coded routes continued toward Luverne, the blue route continued straight and through farmland west of Luverne.

The blue route continues through mostly rural area across the Mt. Ida Highway until it rejoins the current 331 Highway north of Basketbowl and Richburg Hill Road.

The red and orange proposals merge and turn west of Luverne near the water tower, cutting through the area of Ridgecrest Drive.

It circles the back side of Luverne High School, near Greenbrier Drive and just east of the Luverne Country Club before rejoining the current 331 in the area that currently contains Subway, Rite Aid, Jet Pep and other businesses in that row.

Representatives of the Department of Transportation were on hand to answer questions about the proposal, and several people voiced their opposition to the red route.

One of those was Henry Guy Edwards.

“The red line goes right through my property and through my acres of land,” he said.

The pure construction costs of the two proposals are similar — roughly $70 million for the red line and $80 million for the blue route —but those figures don’t include purchasing land from the current owners.

The two routes have roughly the same amount of bridge construction required.

DOT representative Kirk Franklin said that the purchase of right-of-way land is scheduled to begin in 2015, but that date may fluctuate depending on funding.

Citizens were given a comment form from the involvement meeting and encouraged to voice their opinion about the plans.

“People need to make themselves heard,” said superintendent of education Randy Wilkes. “If you’re not pleased with something, tell the Department of Transportation, your public officials and your senators.”

The maps are not available online, but they can be viewed by citizens at the Seventh Division of the Alabama Department of Transportation office in Troy or at the state office in Montgomery.

Though things are still in the planning stages, Probate Judge Jim Perdue said that the bypass is nearly inevitable.

“This meeting is just another step in a process that’s been going on for years,” Perdue said. “Crenshaw County needs four lanes for 331, and you can’t do that without bypassing Luverne. If we don’t do it, Highway 55 or Highway 231 will, and instead of the road being a mile out of town, it’ll be 30 miles out of town.”

“In the long run, the county will benefit,” he said.