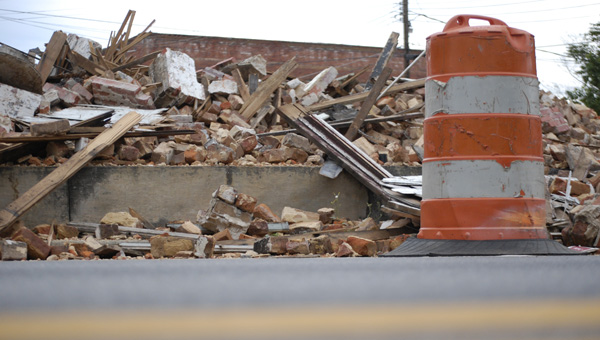 Rubble from the old Petty Building, which was demolished May 19, has not been cleared from the site. Officials say the that until the building next door to is demolished it is unsafe to clear the debris. (Advocate Staff/Andy Brown)

The old Petty Building was once the home to an appliance shop.

It could one day be a park.

“We hope to turn that into a real nice area where we can have events downtown,” Greenville Mayor Dexter McLendon said. “I’m not talking about a parking lot, but more of a park area with grass and trees. That’s what I envision.”

But first the remains of the Petty Building, which was demolished May 19, must be cleared from the site.

“We can’t clean it up right now because of the building next to it,” McLendon said. “We got in there and started looking at cleaning it up and found out that the wall on the building next to it is also in pretty bad shape and if we go in there now and clean up it could do more damage than good. And honestly, it would be a safety issue.”

McLendon said the city has plans to purchase the building next to the Petty Building, and then demolish that building as well.

“Before we could move ahead we had to get an appraisal,” McLendon said. “We’re in the process of taking care of that now and working things out with the owner. Once we get all of that squared away we can move forward.”

McLendon said the city hopes to purchase the building sometime after the next City Council meeting, which is scheduled for July 11.