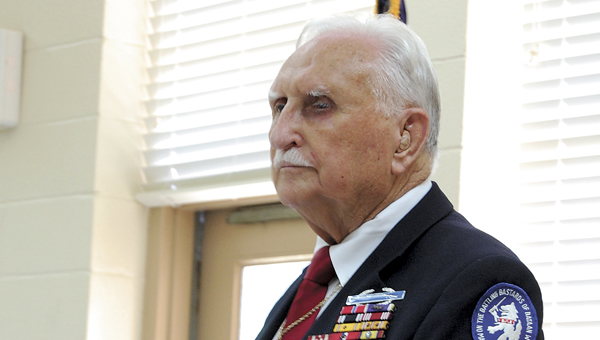 Late in the summer of l944, a telegram from the United State’s Army was delivered to the Frazier family’s home in Ft. Deposit. The telegram informed the family that because Corporal Glenn Dowling Frazier had not been heard from in two and a half years, he was presumed dead.

When his dog tags were discovered in a mass grave in the Philippines in early 1945, the Army notified his family that its suspicions were true. Glenn Dowling Frazier was confirmed to be dead.

Then came a phone call.

“For eight months my family believed I was dead,” Frazier told the Rotary Club of Greenville on Thursday. “So, when I landed in San Francisco the Army said we could make one call and let our families know we were back and that we were OK. I called home and my mother answered. I said ‘Hello, mother.’ Then she said, ‘Who is this?’ I said, ‘It’s Dowling.’

“The phone went dead. I’m standing there saying, ‘Hello, hello?’ No one is there. It’s just silent.”

“My father asked, ‘Who is this?’ and I said, ‘It’s Dowling.’ My father then told me he was the only one that didn’t believe I was dead, but that right then it looked like he had three dead women on his floor,” Frazier said with a grin.

The fact that Frazier can grin while telling the story is a remarkable feat in itself. Frazier’s father was very nearly wrong.

On April 9, 1942, Frazier, who was stationed in the Philippines, became part of the largest surrender by the U.S. Army in its history when 78,000 American and Filipino troops surrendered to the Japanese army.

After the surrender, the Fort Deposit native who had lied about his age in order to enter the Army at just 16 years old, then endured the Bataan Death March, and months of horrific conditions at Camp O’Donnell where hundreds of prisoners died every day from disease, starvation and abuse.

During that time, Frazier volunteered to work on a burial detail. One day, while helping dig a mass grave, Frazier tossed one of his two sets of dog tags into the grave, hoping that if he died somewhere in the Philippines, his parents would have some idea of what had happened to him. It was that set of dog tags that led to the telegram informing his parents of his “death.”

In October of 1942 Frazier was sent to Japan, and spent nearly three years in a series of prison camps where he was forced to perform slave labor. During his imprisonment, Frazier survived double pneumonia, torture, a week of isolation in a covered pit, and frequent beatings. He also very nearly lost his leg to gangrene after being bayoneted by a guard for not lifting his legs high enough while marching.

His treatment by the Japanese army, and the things he saw done to his fellow soldiers, created in Frazier a deep hate for the Japanese.

“I hated them with a purple passion,” he said. “After I saw one of their pilots drop a bomb on one of my friends, and all I could find was his left foot and boot, I killed all of them that I could. I hated them. I’m just being honest.

“ … My hatred for them helped me fight them, but that getting rid of that hatred was the hardest thing I’ve ever had to do. I didn’t want to do it, but a preacher told me that I had to forgive them. I told him I couldn’t and he told me I had to at least try. It took some time, but I can say that I have forgiven them.”

Many years after his experiences in the Philippines and Japan, Frazier put his story on paper. It’s now a best seller titled, Hell’s Guest.

“I wanted to write this book to tell my story to the American people,” Frazier said.

But it’s not just Frazier’s story.

“This book is dedicated to all men and women who fought and died in the Philippine Islands during World War II and in the defense of Bataan and Corregidor, and to all those who worked so hard at the time of World War II, be it at home or on the battle fields to save the world from becoming slaves to two world powers that tried to take away our basic right to be free people and to live as God intended us to live with the right to determine our own destiny,” Frazier wrote on his book’s dedication page.

Frazier, now serving as colonel in the Alabama State Defense Force, was awarded numerous honors for his military service including the Medal of Freedom, the  Bronze Star,  four Purple Hearts, a World War II Victory Medal , a POW Medal, three U.S. Presidential citations and a Presidential citation from the Philippines.