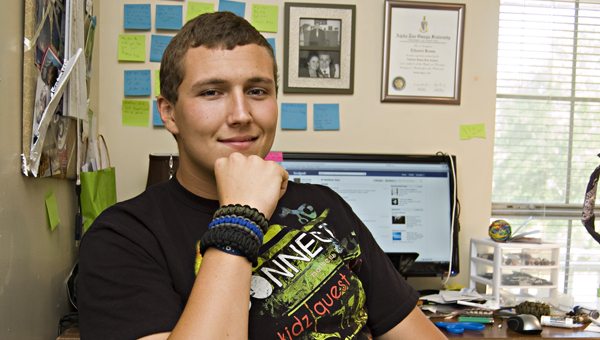 Ethan Brown shows off several of his Baja Bandz creations.

While thinking about ways to raise money for an upcoming mission trip, Ethan Brown had a stroke of inspiration.

Looking at a bracelet made out of paracord, he thought, “I could do that,” and Baja Bandz was born.

The blooming cottage industry started up about a month ago.

“I saw an ad for survival bracelets that were selling for something like $30 at Kinnucan’s,” said Brown, a Highland Home resident. “I found a YouTube video that showed how to weave them, and I started off making them with cheap utility line from Wal-Mart.”

Brown soon upgraded to military-surplus parachute cord, and before long, the business was off and running.

“It’s been like riding a bike downhill,” Brown said about the way Baja Bandz have taken off.

The money raised is being used to fund a mission trip from July 16-23 to the Baja area of Mexico, which is just across the border from California.

Brown is a member of LifeChange Church in Montgomery, and he’s traveling along several friends and members of Highland Home Baptist Church: Summer Hendrick, Alainna Davis and Joe Davis.

Alainna said she went on a mission trip to Baja last year with her dad, Joe, and that this year’s group will be doing some of the same work — building houses, holding Vacation Bible Schools and participating in door-to-door ministries.

“Last year, we had about 500 missionaries that witnessed to around 2,500 people,” she said. “About half of those came to Christ.”

Global Expeditions and Baja Christian Ministries work together to continue the ministry once the missionaries leave.

“I love it,” said Davis, who said that she’s excited to be going back. “The families are just so giving and wonderful.”

Brown said he believes that everything is part of a bigger picture.

“If Baja Bandz is something that’s come into my life to get me to Baja, great,” he said. “If it turns into something more, that’s great too.”

Brown has set out the goal of Baja Bandz in a sort of mission statement: “To aid in the glorification of Christ and the proclamation of the Gospel.”

Since he started making bands a month ago, Brown said he’s raised over $250, but more than half of that has gone back into the cost of materials.

“If you’ve seen it made out of paracord, I can probably weave it,” he said.

The business has also taken to Facebook, and Brown said he hopes to be able to sell the bands over the internet within the next few weeks.

“I’m an information systems major at Troy, so this is right up my alley,” he said. “This whole thing has turned out a lot bigger than I expected.”

For more information about Baja Bandz, check them out at www.facebook.com/bajabandz