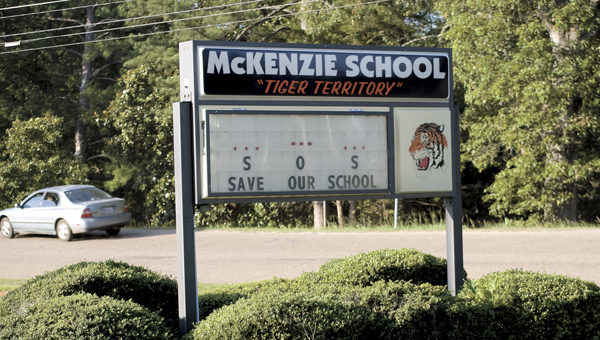 At McKenzie School’s graduation last month, the school’s sign displayed a distress message asking for help to save the school from being closed and consolidated with Georgiana School as a cost-cutting measure by the school district. (Advocate Staff/Andy Brown)

The Butler County Board of Education announced Thursday night at its regular meeting that it will not close McKenzie School.

“This is an item we have determined not to pursue at this time,” Butler County Schools Superintendent Darren Douthitt said.

The announcement was met with cheers from a capacity crowd in the Butler County Board of Education Central Office boardroom.

It was an announcement that many had been waiting to hear for months.

The school district closed the 2010 fiscal year with $1,126,854 in the General Fund, $609,521 less than the one-month operating balance required by the State Department of Education, which led the BOE to look at a number of ways to reduce the school district’s operating costs. Since March, the BOE has discussed the possible closure and consolidation of McKenzie School with Georgiana School as one way to cut costs.

Thanks to assistance from the City of Greenville, the Butler County Commission and Rep. Charles Newton that option has been taken off the table for now.

According to Board of Education President Linda Hamilton, the City of Greenville and the Butler County Commission have made a verbal pledge to provide funds to help offset the budget shortfall. She declined to give the amount, citing a need to finalize the agreement.

“We owe a great deal of thanks to Mayor Dexter McLendon, Commissioner Lynn Harold Watson and Rep. Charles Newton,” Hamilton said. “Through their efforts we are able to say that this item is not being considered at this time.

“… I just appreciate them rolling up their sleeves and getting this done for us. We owe them a great deal, and I’m so proud to be a part of a community like this where everyone works together.”

While McKenzie School is safe for another year, Douthitt did acknowledge school consolidation is an option that may have to be considered again in the future.

“In this financial climate there could be causes that would require us at any moment to explore these things if it means keeping the lights on and resources in the hands of our students,” Douthitt said. “I stand as the superintendent ready to make tough calls at any moment and if over the next year we need to revisit any of these things we will.”

Board member Mickey Jones, who represents District 5, which includes McKenzie School, asked that the situation be handled differently if the need to consider consolidation arises in the future.

“This is still a possibility in the future,” he said. “I request that if this is brought up again, that we make sure we have the numbers to back up consolidation. It’s not fair to the community in the south end of the county to go through what it just went through again.”

When the possible closure and consolidation of McKenzie School with Georgiana School was brought up in March, it was met with strong disapproval from McKenzie teachers, staff, students and supporters. An estimated 1,000 people showed up at the BOE’s March 17 work session at R.L. Austin Gymnasium on the Georgiana campus to voice their concerns. Many of those supporters showed up wearing McKenzie colors and carrying signs that said “Save My School!”

Months later, the letters “S.O.S.” – short for “Save Our School” and a play on the Morse code distress signal – were scrawled across the school’s sign the night 29 members of McKenzie’s Class of 2011 received their diplomas inside Tiger Stadium.

It appears that the message was heard – at least for now.