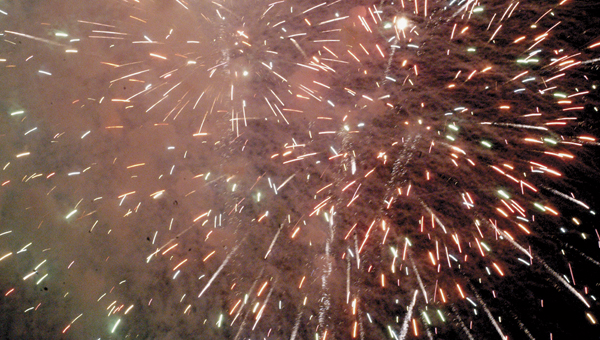 Fireworks will light up the sky above Tiger Stadium July 4 as Greenville celebrates America.

After a year hiatus, the Greenville Area Chamber of Commerce is bringing back “Celebrate America.”

The event, which is being held on July 4 for the first time in a number of years, will feature games, food, music, and of course, fireworks.

“We’re so excited to be having the event again this year,” Francine Wasden, executive director of the Greenville Area Chamber of Commerce, said. “The City and the Chamber both felt like this is an event that everyone really looks forward to, and is really a great time for the community to get together and have a good time. With the Fourth being on a Monday, we’d really like to encourage everyone to make plans to be back in town to celebrate with us. It’s going to be a really great event.”

Night Magic, a company that has handled the Montgomery Biscuits’ fireworks displays in the past, will be responsible for creating the fireworks show, which will begin at 9 p.m.

For this year’s event, Chamber members have been divided into three teams – Red, White and Blue. The teams, each donning their respective colors, will compete in a variety of contest from tug of war to volleyball to relay races.

“It’s all about having fun,” Wasden said. “If there’s someone out there that wants to be on a team, but hasn’t been contacted yet, they can contact the Chamber and we’ll be sure and get them on a team.”

There will also be Air Jumpz for the children, a dunking booth and Bill Campbell will be providing the music for the event.

Wasden said there would also be plenty of food available at the concessions stands.

“Come hungry,” she said. “We’ll have hotdogs, chips and drinks.”

While admission to the event is free, the money collected from food sales will go to the Chamber and be used for the purchase of a new City of Greenville display.

“We have an older display, but it needs updating,” Wasden said. “We’ll also use the money to purchase some giveaways. A lot of times we’ll have people come in and ask for little mementos from Greenville and we’d like to buy some of those to have on hand to giveaway and help promote Greenville that way.”