Georgiana grads together one last time 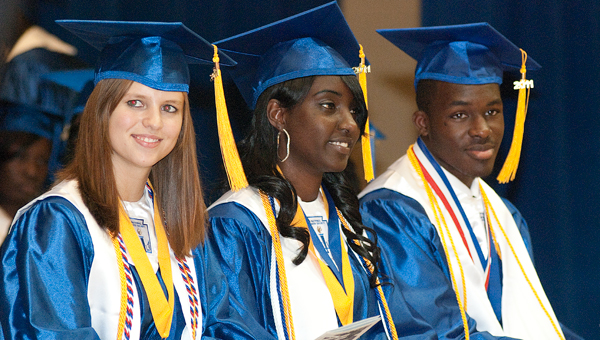 “This is our one last celebration to enjoy together before going off to bigger and better things,” said valedictorian Brittany Turner. “Its easy to see how much Georgiana played a role in shaping us into who we are.”

The senior continued, recounting the past 13 years of school that most of the seniors had spent together, including a difficult transition to a new building while the class was in 10th grade.

“We finally did it,” Turner said, choking up.

After encouragement from the crowd, Turner regained her composure.

“The more I think about it the more real it becomes,” Turner said. “It’s time to put our knowledge to good use.”

“Looking back, its not about who made the best grades, its about who is working towards bettering themselves,” Turner said. “Let us take what we have learned and use it to better our futures.”

Salutatorian Aleshia Cheatham urged her classmates to put faith in God, telling them to “trust the Lord with all your heart.”

“Now is the time you must expect something from yourself,” Cheatham said. “This is it, but this is only the beginning.”

Turner offered one final piece of advice to her fellow classmates.

“Take the path that leads you to the most happiness in life,” Turner said. “That’s all that matters.”

After principal Joseph Dean presented the new class of graduates, Cheatham, Jerika Hawkins and Ke’Annya Mixon led the class in a singing of Georgiana’s alma mater one final time.

The graduates filed off the stage before gathering under the basketball goal to throw their caps in the air and leaving the gymnasium as alumni.