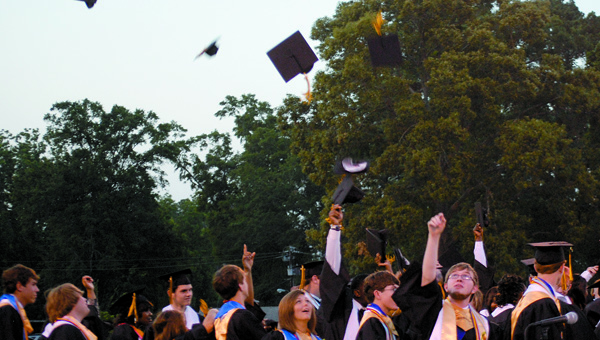 Garrett Hartley remembers the first time most of Greenville High School’s Class of 2011 was together.

“I was sitting on the floor of my Kindergarten and looking around at all the other kids around me,” he said. “Who would have thought that out of a bunch of stinking, drooling five-year-olds would come some of my best friends?”

On Wednesday, that group of “stinking, drooling five-year-olds” marched across the football field at Tiger Stadium as graduates of Greenville High School.

It was a bittersweet moment for Hartley, the class salutatorian, and his classmates.

“All great things must come to an end,” he said. “Today the road veers off into many different directions and all of us must take our own road to our own destination. This is most likely the last day our entire graduating class will be together in full, so I’d like to say congratulations to all of you, and also that the Class of 2011 will not be forgotten.”

Valedictorian Raymond Moody elected not to share his own words of wisdom with his classmates, but instead turned to scripture.

“A commencement speech is a time when I’m supposed to give advice and encouragement to my class,” Moody said. “What advice can I give to people who have lived the same amount of time I have, and have had basically the same experiences I have had? So, instead, I’m going to share a verse from the Bible. Jeremiah 29:11 says, ‘For I know the plans I have for you,’ declares the Lord, ‘plans to prosper you and not to harm you, plans to give you hope and a future.’ I wish you all the best of luck, triumph in the future, and congratulations.”

And with that, the Class of 2011 was awarded its diplomas by principal Brad Cook and assistant principals Ward Thigpen and Cincrystal Poythress.

Moments later, the class tossed their hats in the air in celebration of its journey from “stinking, drooling, five-year-olds” to high school graduates.