McKenzie grads on ‘road to success’ 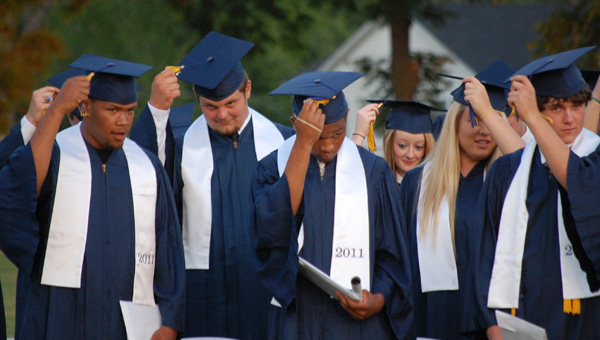 “Our adulthood, so long awaited, has arrived,” valedictorian Richard Ballard said. “We’re grown up and it’s time for us to go out into the world.”

McKenzie School principal Randy Williams believes McKenzie’s Class of 2011 is prepared to do just that.

“Receiving this diploma is the beginning of a road to success,” he said. “I certainly believe that each and everyone of these graduates will be successful. I’m proud of them and proud to have been a part of their education. I hope they will always remember McKenzie School and how the faculty work hard to make sure that each of them is successful in whatever they do.”

“It’s been a great honor to know all of you and become your friend,” Pitts said. “Most of us have know each other since Kindergarten. … We’ve enjoyed the good times like prom, getting our caps and gowns and most of all graduating. We’ve shared tears and smiles, and these are memories we should cherish.”

Ballard reminded his classmates that their paths will begin to diverge following Tuesday night’s ceremony, but they will always share a common history.

“When we leave here we will all go our separate ways, but we will all go with the common goal of success and a proud history as a McKenzie Tiger,” Ballard said. Moments before the seniors were presented with their diplomas and turned their tassels, senior Cody Scott and Anna Howell performed an original song dedicated to the Class of 2011.

The chorus began, “Throw those blue caps to the sky, kinda sad it’s time to say goodbye, I’ll miss this.”

Following the recessional, the graduating class played out the words of the song tossing their caps into the air in celebration.