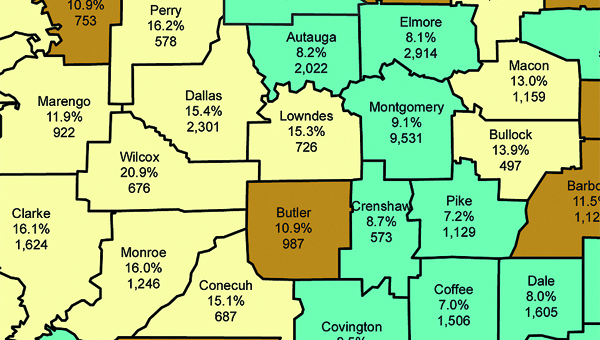 Butler County's unemployment rate for the month of April was 10.9 percent.

Alabama’s unemployment rate rose slightly to 9.3 percent for April, but that figure does not include any impact from the deadly tornadoes that tore through the state at the end of April and left in their wake hundreds of businesses in ruins.

Alabama Department of Industrial Relations spokesperson Tara Hutchison said April’s figure does not reflect the impact of the deadly tornadoes April 27 because the measurement was done before the storms hit. She said the impact will show up in the May rate, which will be announced June 17.

State Industrial Relations Director Tom Surtees said Friday that April’s rate for the state compares with 9.2 percent for March and is better than the 9.8 percent the state recorded last April.

He said Alabama’s rate mirrored the national trend, which saw unemployment increase from 8.8 percent in March to 9 percent in April.

“These kinds of minor fluctuations are to be expected as we emerge from a recession,” Surtees said in a press release.

April’s measurement revealed that Butler County’s unemployment rate had dropped slightly, moving from 11 percent in March to 10.9 percent in April.

Butler County’s unemployment rate ranks 24th out of the 67 counties in the state.