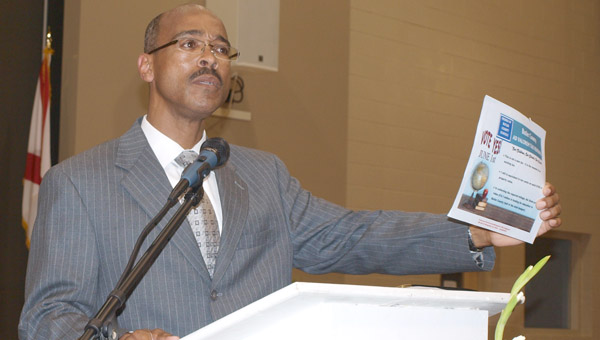 At Thursday's Butler County Board of Education meeting, Superintendent Darren Douthitt stressed that the elimination of the supplements is not the same as eliminating coaching positions. (Advocate File Photo)

In a cost-saving measure, the Butler County Board of Education voted Thursday night to eliminate all supplements.

“This is something we had to do before the last day of school,” Board president Linda Hamilton said. “If we hadn’t cancelled them now we would have been locked into that payment for the next school year.”

“In a time of great financial difficulty, this is something we have to look at,” Hamilton said. “In order to do that, we have to cancel all supplements, not just coaching supplements, and then go back and look at the things that we can afford to bring back.”

At the board meeting, Butler County Schools Superintendent Darren Douthitt stressed that the elimination of the supplements is not the same as eliminating coaching positions.

“Let’s be clear. We are not canceling coaches,” Douthitt said. “We’re simply eliminating the cost of the supplements in order to cut expenses.”

The possibility of eliminating a portion of the coaching supplements was first discussed at the BOE’s March meeting as one of handful of ways to trim the school district’s budget.

At the time, the BOE mentioned reducing the coaching supplements by 50 percent in an effort to save $106,996.50 a year.

The need to cut supplements is the result of the school district ending the 2010 fiscal year with $1,126,854 in the General Fund. That’s $609,521 less than the one-month operating balance required by the State Department of Education.

Other options discussed at March’s meeting to help offset the budget shortfalls are still on the table.

Board member Joe Lisenby also mentioned the possibility of reducing the board members stipend by 50 percent for a savings of $18,000.

While other cost-saving measures are sure to be enacted, a decision on McKenzie School’s future is not expected to me made until the Legislature approves a finalized state education budget.

“All the options are still very much on the table,” Hamilton said. “We can’t make any decisions now because we don’t have a finalized budget. We can all look and try to get an idea of what to expect, but the truth is that at this point anything can happen (with the state budget), and until there is a final stamp put on it, it would be crazy to act. We need to wait for firm numbers. Once the budget is finalized, we’ll come back and have a meeting and determine what the next step is.”

In other action, the Board: