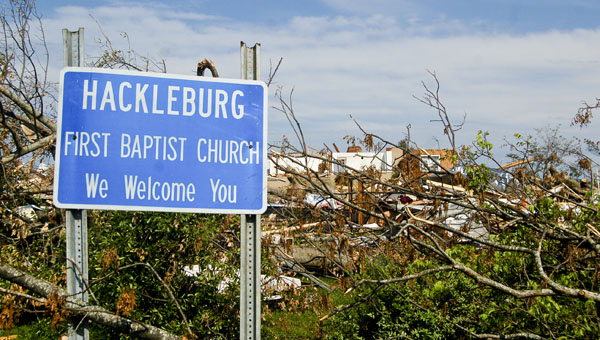 A sign welcoming visitors to Hackleburg is one of the few signs in town left standing following last month’s tornado outbreak.

Last Friday, several employees of Crenshaw Community Hospital got the chance to travel to Hackleburg and see the tornados’ damage first-hand.

The mission, which is the latest in a number of trips from Crenshaw County to north Alabama, had its roots in a trip that Carol Dillon and Pam Salter took to Cullman.

“Carol came to me and said that we were going on a trip to help someone,” said Bonnie Trotter, public relations manager for CCH. “The Red Cross suggested that we go to Hackleburg, and it snowballed from there.”

After members of the community found out where the team was headed, donations poured in to the hospital.

Much of the outpatient surgery waiting room was filled with supplies, which was loaded onto several pickup trucks.

After arriving at Hackleburg, which is located in Marion County, the team spent much of the morning organizing and sorting donations in two army tents.

In addition to the disaster relief supplies carried by the hospital, several different kinds of medical supplies were also taken, and Sandy Walker and nursing students from ATSU and Troy University spent the day caring for the injured.

“We took tetanus boosters, and there were also people with high blood pressure who had no medication and diabetics with no insulin,” Walker said. “We also treated people for shock as much as anything.”

Friday afternoon, the team was sent to the home of Opal Harper, an 85-year-old retired school teacher from nearby Hamilton who had several trees down in her yard.

Harper was in the basement when the tornado hit and spent five days without power.

“I wish I could get out and help,” she said as workers cut up downed trees in her yard and carried the pieces off. “I can’t believe that so many people would want to come help.”

“We really want to thank everyone from the entire county who donated,” Trotter said.