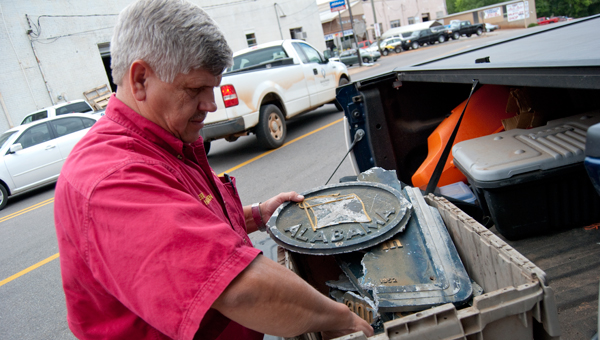 Sheriff Kenny Harden sifts through what is left of the stolen historical sign. The sign read: Creek Indians, led by Savannah Jack, attacked a well-armed party of settlers carrying dispatches to Fort Dale. After this second massacre in 7 days, settlers sought refuge in forts and stockades.

Authorities are still looking for suspects after discovering a historical marker in pieces at a local recycling center.

Sheriff Kenny Harden said that the historical marker on Highway 10 West, which marked the location of the 1818 Butler County Massacre, was reported stolen on May 8.

“We are still looking for any leads or information regarding this theft,” Harden said. “This was a piece of history. Whoever sold it got $22 for the scrap aluminum, but now it’s going to cost over $2,000 to replace.”

Recycling centers obtain information from all individuals that they pay for scrap, Harden said, but its difficult to figure out who sold the sign.

“They know every person they bought aluminum from, but they can’t always pinpoint where it came from,” Harden said.

The sign, Harden said, was most likely disguised in a barrel full of other aluminum pieces.

“If they wouldn’t have broke the sign into piece, it probably would have been discovered right then,” Harden said.

Harden asked that anyone with information regarding this crime call the Sheriff’s office at 334-382-6521.