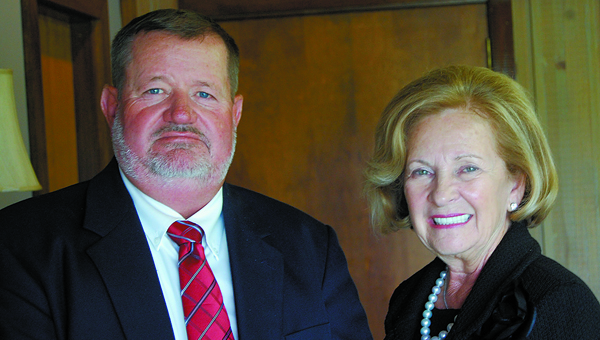 For Wayne Lee, May 12 was a homecoming of sorts.

That’s because it was on that day that Lee was named president of Structural Wood Systems. The appointment brings Lee back to the company where he spent 34 years before leaving in 2006 to start his own business. For the last four years, Lee has worked as an investigator for the District Attorney’s office.

“I’m getting back to my roots,” Lee said following the board meeting that finalized his hire. “I’m back where I belong.”

Carol Harrison, Harrison Industries, Inc. chairman of the board, said the return of Lee is the fulfillment of her late husband Ben Harrison’s vision.

“It was always his dream to promote from within,” Harrison said. “He wanted to have local people from Greenville and Butler County succeed and move up in the ranks of the company, and that’s what we have here. We’re proud that we are able to bring Wayne back and fulfill that dream.

“This company was built with local people, and most of the people we have working here have been here for many years, and we want to continue that philosophy of building through local people.”

It didn’t take much convincing on Harrison’s part to get Lee to return to SWS.

“Mrs. Harrison offered me the job and I took it,” he said with a smile. “That’s all it took.”

Harrison hopes that Lee’s return will provide a boost to the company, which specializes in the custom manufacturing of structural glued laminated timber.

“We are delighted that he has agreed to return to SWS as president to lead the company to new levels of growth and profitability,” she said.

Ron McSpadden, chief operating officer of SWS and director of Harrison Industries, Inc., announced at the board meeting his plans to retire. He will remain in his positions until his retirement takes effect Dec. 31.

“We deeply appreciate all of Ron’s hard work, loyalty and integrity shown to both SWS and Harrison Industries over the past nearly 20 years,” Harrison said.

Robert Wilson was also elected to the board of directors of Harrison Industries, Inc. Wilson is a retired general partner with Goldman Sachs and was a founder and the first CEO of Lending Tree, Inc.