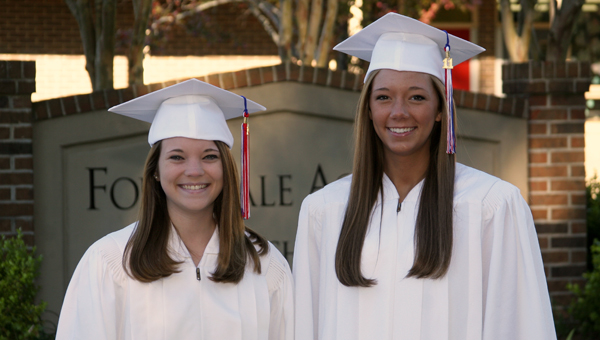 Anne Carol Branum might have been able to learn to love the University of Alabama.

But why take the chance?

Branum, who will graduate as Fort Dale Academy’s valedictorian on May 27, will attend Auburn University instead.

“I went back and forth between Auburn and Alabama,” Branum said. “In the end Auburn just seemed like the best fit. Being an Auburn fan might have played a part in it, but I probably could have gotten over being an Auburn fan at Alabama – toward the end maybe.”

Branum plans to study pharmacy on the Plains.

Branum, who played basketball and soccer and was also a member of the dance team, said “balance” was the key to being involved in extracurricular activities and still excelling in the classroom.

“I’d just have to make myself not slack off even when we had games,” Branum said. “I just had to balance things out and make sure I was working hard at everything. It feels good (to be valedictorian). It lets me know that all the hard work paid off.”

Boulware played volleyball and basketball and was an “active member of the pep squad” before giving up athletics in order to take a job to save up for college.

“I just had to make sure I stayed on top of things,” Boulware said. “In the last year I learned that there is a big difference in work tired and sports tired, but since it’s all I ever knew, it wasn’t too hard.”

Boulware, a lifelong Alabama fan, will attend school at the Capstone.

“Alabama is where me and my dad click,” Boulware said with a smile. “It’s the only school I applied to and I haven’t thought twice about it.”

She plans to study accounting.

Fort Dale headmaster David Brantley believes both students will be successful during the next stage of their education.

“They are both wonderful students,” he said. “They’re both great representatives of our school and we’re excited about what the future holds for them.”