Sandy takes over as EMA director

In 2004 Hurricane Ivan slammed into the southeast United States leaving a path of destruction in its wake.

Hurricane Ivan, which caused an estimated $18 billion worth of damage to the U.S., also served as the catalyst for Shirley Sandy.

“After Hurricane Ivan I was volunteering with the Red Cross and I was right out there with the public,” Sandy said. “I saw the needs of the people and also the need for people to be prepared for things like hurricanes. For me, that’s when I knew what I wanted to do.”

Seven years later, Hurricane Ivan has landed Sandy in Greenville as Butler County’s new emergency management director. Sandy is replacing Bob Luman who is retiring from the position, but is assisting with the transition.

“Bob has been helping me meet the people in the community, showing me around and filling me in on how things have been done here,” Sandy said.

“He’s been a great help. At the moment I’m mostly observing and learning the system that has been in place, and it looks like it’s a good one, but if down the road we need to make some changes we’ll do that. Right now I don’t see a need to do that.”

Sandy, who has volunteered with both the Houston County EMA and the Geneva County EMA since 2008, is excited about her new role as Butler County’s EMA director

“So far it’s been great,” Sandy, who began work on Monday, said. “The people in the community have been so friendly. I’m glad to be here and look forward to the challenge.” 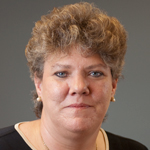