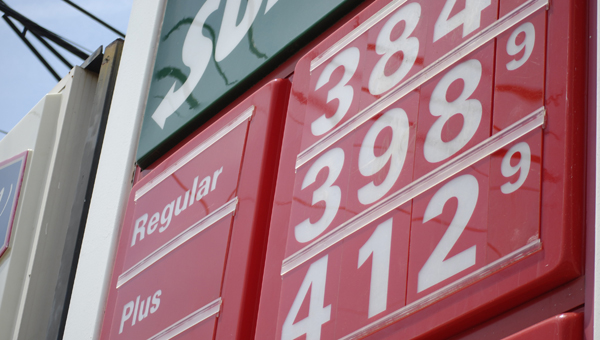 According to AAA, the average price for a gallon of regular unleaded gasoline in the Greenville area is $3.85. (Advocate Staff/Andy Brown)

Area motorist who have grown accustomed to seeing gas prices climb during the last year received a pleasant surprise this week.

It’s a trend that AAA spokesman Clay Ingram believes could continue during the next several weeks.

“Gas prices have dropped a little bit over the past couple of days, and look like they will drop more in the coming days and maybe weeks,” Ingram said. “Our prices have been ‘artificially inflated’ over the past few months due to anxiety on Wall Street about the situation in Libya. That anxiety seems to be subsiding to a large degree, which should help prices slip in the near future, since our supply is very strong and our demand is very weak. The investment world has pushed our prices upward over the past few months, but that will hopefully be corrected to some degree in the coming weeks.”

According to AAA, the average price for a gallon of regular unleaded gasoline in the Greenville area is $3.85. That’s a 3-cent decrease from a week ago, but a 17-cent increase from a month ago.

The average price of gallon of regular unleaded gasoline in Alabama is $3.79, which is 2 cents higher than last week’s average and 18 cents lower than the national average, according to GasBuddy.com.

“Our prices change frequently these days because the oil companies, gas wholesalers and retail stations are quick to follow oil price increases with price increases of their current inventory,” Ingram said. “In fact, some retail stations will change their prices every day based on what they ‘think’ their next gas shipment will cost them, rather than basing their prices on what they actually paid for the gas they have in inventory.  While that practice in not illegal, AAA strongly opposes that behavior. Plus, while these ‘increases’ are quickly added to pump prices, the ‘decreases’ are very slow to reach the pumps.”

While Ingram does expect gas prices in Alabama to spike at least one more time before summer traveling begins, he does not believe prices will reach $4 per gallon.

“There have been a lot of predictions this year about where our prices might go,” he said. “We certainly could reach $4 per gallon in Alabama, but I’m not convinced that will happen. I just don’t think our demand is strong enough to push prices that high, and there is no other justification for it.”

According to Ingram, motorists can impact gas prices.

“Motorists can actually play in huge role in lowering prices more quickly by being diligent price shoppers,” he said. “If we all made a firm commitment to purchase the lowest priced gas in our normal travel area, we would reintroduce competition in the marketplace and the oil companies and retail stations would have to compete for our business by lowering their prices. However, if we continue to purchase from our local station regardless of price, our prices will stay much higher.”