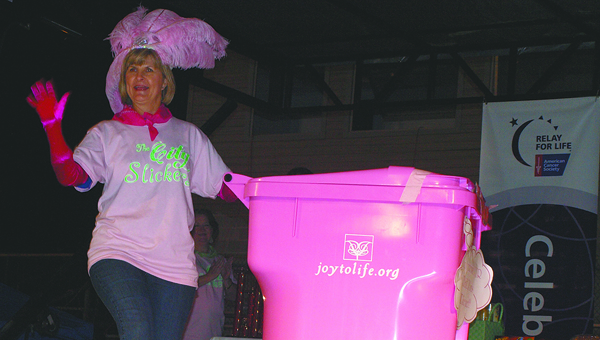 Barbara Philpot shows off one of the pink trashcans that was raffled off as part of the City of Greenville’s “Kick Cancer to the Curb” fundraiser for the 2011 Butler County Relay for Life. (Advocate Photo/Angie Long)

Relay For Life’s “Rustlin’ Up a Cure” managed to rustle up $83,000 and counting for the American Cancer Society last Friday night. Hundreds turned out at the YMCA football field for a night of entertainment, games, good food and special memories of those who lost their lives to cancer, while celebrating all those who have survived.

The county’s first-ever flashmob dancing to a medley of songs of survival, Relay’s first Stick Horse Show and a group of young riders presenting the flags on horseback for the opening ceremonies were among the highlights of the evening.

Long-time Relay for Life emcee, Ralph Stacy, was also remembered on stage with a memorial plaque to be presented to his family.

The 2011 edition wound down in the wee hours of the morning, when trophy winners were announced.

The top fundraising team with 15 members and less was the City Slickers team for the City of Greenville, helmed by Sue Arnold.

Among teams of 16 members and up, captain June Earnest and her Sandcutt Community came out on top.

The top per capita fundraiser was Avon and Cynthia Quates.

And the highly prized Spirit of Relay Trophy, which goes to the team with the most Relay Bucks earned through meeting deadlines, fundraising and team participation in Relay activities, went to W.O. Parmer Elementary School and the team’s jubilant co-captains, Amanda Coghlan and Heather Conway. Coghlan and Conway performed energetic dances on stage to help their team meet their $4,000 goal, a challenge they met and exceeded.

Relay chair Galahad Smith says he is pleased with the monies raised and the event itself.

“We will still have some money coming in here and there that will be added to our total,” he said.

“But I think with the economy still down and people giving to help with the tornado survivors, what we have raised so far is amazing. I appreciate our committee and all the volunteers and sponsors who helped make this event a success once again.”

Funds raised by ACS through Relay events go to support cancer research and education and to assist cancer patients with transportation to treatments, lodging and medical needs.