Panthers chip in to help Berry 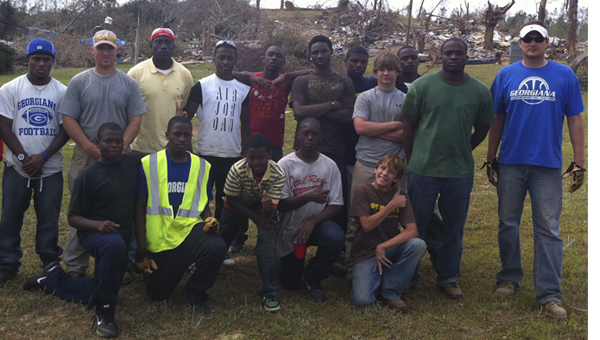 When a string of deadly tornadoes tore through Alabama on April 27 leaving a path of destruction in its wake, Georgiana football coach David Watts felt compelled to do something.

He started by grabbing the phone and calling an old friend.

“(Berry High School football coach David Raines) and I are good friends,” Watts said. “We coached together at Highland Home, so after the storms went through I called him and asked if there was anything we could do to help out.”

Raines informed Watts that many families in Berry had lost everything and were in dire need of help. That’s all Watts needed to hear.

The Panthers’ coach gathered a group of three other coaches and 12 players and headed to Berry.

“We took a couple of chainsaws with us, and I and Coach (Kirk) Norris cut up trees and the players hauled them away,” he said. “We picked up big blocks from buildings that had been destroyed and removed them from the area. We basically did debris removal and cleanup.”

After three and half hours of “hard work” the Panthers made felt like they had made a pretty good dent in the cleanup process at the site they were working on. Then Watts took a step back.

“It was like we had taken a cup and scooped some water out of the ocean,” he said. “There was that much destruction. … I told my wife when we got home that if it had been me, I don’t know if I wouldn’t have just picked up and left. It was that bad.”

Watts said he was especially proud of his players.

“I had mixed emotions,” Watts said. “You look around and see all that destruction and it breaks your heart, but I was really proud of how hard our kids worked. I hope this gives them some perspective and helps them have a better appreciation of what they have. I was very proud of the effort these kids gave.”

The Panthers’ effort was not lost on the people of Berry.

“This group of coaches and players have made a lasting impression on all of the people who had the pleasure of meeting them” Raines wrote in a letter to the editor.

“These guys are first class in every way.  … It was a touching experience to see a group of young men truly just wanting to help people.”