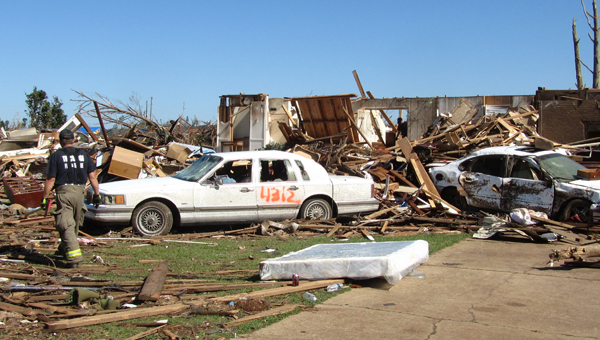 Butler County Chief Deputy Joe Salter said it looked like a “bomb had been dropped” on the areas of Tuscaloosa affected by the April 27 tornado that devastated the area. (Photo Courtesy of Joe Salter)

Butler County Sheriff Kenny Harden said that once he heard that Tuscaloosa needed help, he sent all the personnel he could part with.

“They would have done the same for us,” Harden said. “It’s all about neighbors working together.”

Chief Deputy Joe Salter made the trip, along with deputies Tim Williamson and Jamie Harville.

Salter said the devastation was hard to explain.

“It was like someone dropped a bomb,” Salter said. “The pictures can’t do it justice. Sometimes, it was just destruction, as far as the eye could see.”

Salter said that the tornado leveled homes and buildings of varying sizes and materials.

“It didn’t matter if you were in a mobile home or a big, brick house,” Salter said. “The only safe place to be was underground.”

The three deputies stayed in a command center outside of town, Salter said, and slept on cots while they weren’t making their daily patrols. Though they didn’t experience it first hand, Salter said he heard of a plenty of people being arrested for thefts, especially copper thefts.

In addition to the heartbreaking sights, Salter said he heard plenty of stories while making the rounds around his sector. He recalled one conversation he had with a man who had recently fought a battle with cancer and had dropped his house insurance to pay medical bills.

“The man had recently got on his feet, got back to work and decided it was time to pick up insurance again,” Salter said.

The appointment with his insurance agent was scheduled, but the tornado would strike before the man ever regained coverage.

“He lost everything,” Salter said.

Salter said the experience made him proud of the relief effort, as he saw persons from all over the United States lending a hand to those in need.

It also changed his mind about the seriousness of weather warnings.

“I’m going to think about the next time those sirens go off a whole lot differently,” Salter said.