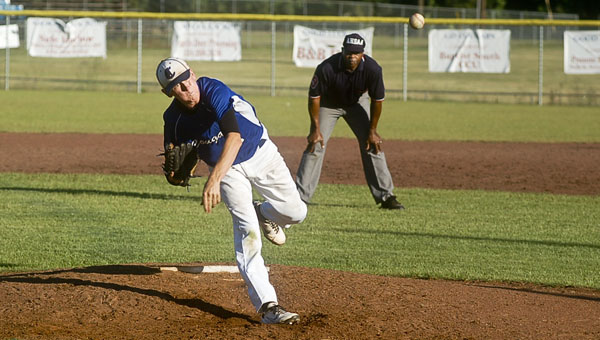 Michael D'Arville earned the win for the Cougars in the first game against Sumter.

The Crenshaw Christian Academy Cougars picked up a pair of wins over Sumter Academy to earn a spot in the Class A state baseball championship game tomorrow.

The Cougars and the Eagles squared off in Luverne last Wednesday, and CCA won the first game 10-2.

Michael D’Arville pitched a complete game, only giving up three hits and striking out six.

He also went 2-3 at the plate with a double and a triple.

Pete King was the offensive star for the Cougars, going 3-4 with a grand slam in the third inning to put CCA up 5-2.

“Michael didn’t have his best stuff, but he worked through it,” said head coach Roland Jones. “Our defense played really well, and we also hit the ball well.”

In the second game, the Cougars earned a 5-3 victory.

King pitched a complete game, striking out 15 and giving up three hits.

King also went 2-4 at the plate, and Justin Fuller went 1-3 with two RBIs.

“Pete gave up a couple of home runs on high pitches, but he never gave in,” Jones said.

The Cougars will face the winner of Coosa Valley and Cornerstone tomorrow at Paterson Field in Montgomery at 3 p.m.