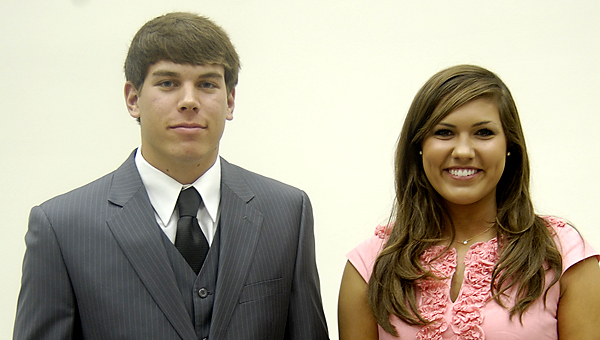 That’s the word both Fort Dale’s Lori Fail and Greenville High’s Raymond Moody used to describe the moment they heard their names called as the 2011 Achiever Award winners.

“When they called my name out I was very surprised,” Fail said. “There were so many great people nominated for the award, I don’t know how the judges were able to choose. Everyone was equally deserving of this award, and it’s such an honor for me to receive it.”

Like Fail, Moody counted it an honor to simply be nominated and was just as surprised when his name was called.

“It was definitely a surprise,” he said. “With all the great people that were nominated for the award it really makes me feel special to be at the top. It feels good.”

The pair was presented the award at a banquet Thursday night at First Baptist Church. Along with the award, both Fail and Moody will receive a $1,500 scholarship.

Prior to the winners being announced, Greenville Mayor Dexter McLendon praised the Achiever Award committee members for organizing the event.

“This is such a great event,” McLendon said. “… Most of the time when we pick up a paper we read about how bad our kids are. This is a chance to recognize a group of kids for doing great things.”

Along with each of the 34 nominees being recognized, Troy University assistant head football coach, and former Georgiana High head coach, Shane Wasden provided the keynote address.

“When I come to Butler County, I’m coming home,” Wasden said. “Some 43 years ago, I was born right down the road in the metropolis of Georgiana, and I’m excited to have the chance to come back home and be here tonight.

“It’s an honor for me to be able to speak to these young men and women. I’d like to congratulate the nominees. They are special people. This is an elite group. Our elite and our future.”

Wasden challenged the nominees to develop a vision for their life, to keep a great attitude and to learn to laugh at themselves.

Wasden also challenged the nominees to define success by a different standard than most.