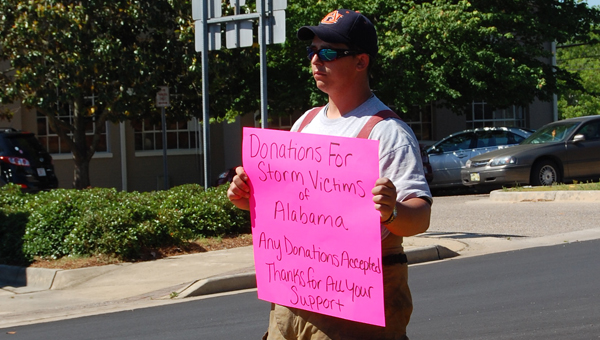 Bobby Stinson was one of several members from the Liberty Volunteer Fire Department helping to collect donations for those affected by Wednesday's deadly tornado outbreak across the state. (Advocate Photo/Andy Brown)

In the wake of Wednesday’s deadly storm, which claimed the lives of at least 204 people across Alabama and left countless others without homes, the Liberty Volunteer Fire Department is hoping to ease the burden of some affected by the storm.

“Some people lost everything,” Liberty VFD Assistant Chief Gaby Blackmon said. “So, anything that anyone can think of that they think they would need in a situation like this, we’ll accept it.”

The collection drive, which began today at 8 a.m. and will end at 5 p.m., will continue Saturday.

Volunteers will be in the Butler County Courthouse parking lot accepting donations beginning at 8 a.m Saturday.