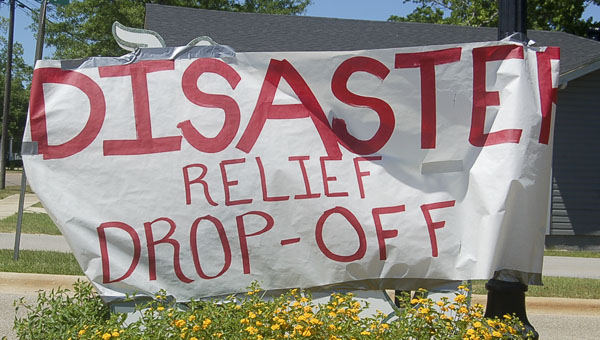 A relief trailer is accepting donations in front of Brantley's City Hall.

While Tuscaloosa has been one of the main focal points of disaster relief in the wake of the recent tornados, Brantley is collecting items in front of city hall for Hackleburg.

The Associated Press reports that 27 people have been confirmed dead in the small town, and 11 are still missing.

Brantley’s Carrie Mitchell said that she has a step-sister who lives in Hamilton, the county seat of Marion County, where Hackleburg is located.

“When she told me about the situation up there, it just overwhelmed me,” Mitchell said. “They’re a small town just like us, and we want to collect what we can.”

A relief trailer has been parked in front of Brantley’s City Hall, and donations are being collected.

Among the requested items are paper products (such as paper towels and toilet paper), bottled water, batteries, personal hygiene products and other emergency supplies.

The trailer will be taken to the Marion County Red Cross in Hamilton on Sunday, and future trips in the coming weeks are also planned.

“They say it’ll probably be a week before they can even start cleaning up, so we’ll make more than one trip,” Mitchell said.

Brantley and Hackleburg share a certain connection: both schools met in 2009 for the Class 1A High School football championship.

“People are focused on Tuscaloosa, but some of our kids here know people up there,” Mitchell said. “I hope and pray that if something happened to us, someone would do the same.”