Putting on the Ritz this weekend 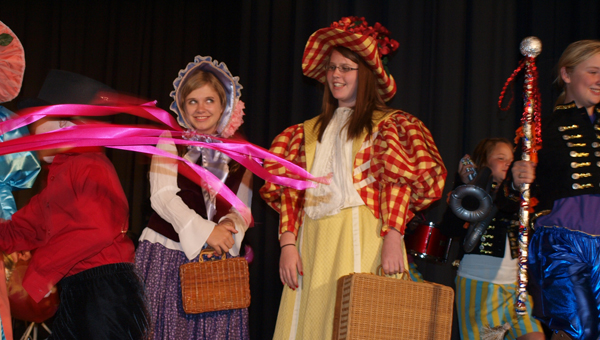 Members of the Ritz Players take in the sight as the parade passes by during rehearsals for "Putting on the Ritz."

A flurry of activity is taking place.  A search for a misplaced vest, a missing tie. Headgear straightened, wigs smoothed. A baritone voice singing snatches of songs. Mics being checked. A touch more blush, a little more mascara. Feet slipped into dancing pumps and clogging shoes. A deep breath as the music swells.

Time to take the stage.

This Thursday, Friday and Saturday, April 28, 29 and 30, the Ritz Players will bring song, dance and comedy to the well-worn boards of the Ritz’s stage as they perform in the fifth annual Greenville Area Arts Council fundraiser, “Putting on the Ritz.”

“We have cast members from all parts of the community, from our most prominent citizens to elementary school students, from young children right up to our oldest cast member, Bessie Rae Butler,” says Nancy Idland.

Idland is the director of the show and executive director of the Greenville Area Arts Council. The monies raised through ticket sales and sponsorships will go to help pay the artistic fees for the professional productions brought to the Camellia City each year.

This year’s show revolves around vintage TV in the comedy and variety genres, taking audience members on a nostalgic trip back to the days of Ed Sullivan, Dick Clark, Mitch Miller, Lawrence Welk and The Muppet Show. There are performances of those catchy theme songs from shows like “Green Acres” and “The Beverly Hillbillies.”

The second act is devoted to “Hee-Haw: Greenville Style” with monologues, jokes, and lots of singing and dancing of the down-home variety.

A special treat for the audience will be organist Kevin Cartwright performing on a beautiful console organ specially delivered to the theater for “Putting on the Ritz.”

“Kevin is fabulous and he will be playing for us during our intermissions each night. It’s like having a touch of Atlanta’s wonderful Fox Theater right here in Greenville,” says Idland.

“We also some great props created by the talented T.K. Lee and once again, our seamstresses have done a terrific job with all the costumes.”

And it won’t be just the people on stage who are part of this year’s production.

A fun video featuring folks from all over Greenville will also premiere at the event.

“Keep an eye out for some familiar faces,” says Idland.

The curtain goes up each night at 7:30 p.m. Tickets are available at The Pineapple and are $20 for adults and $15 for students.