Cicada ‘love song’ not music to many ears 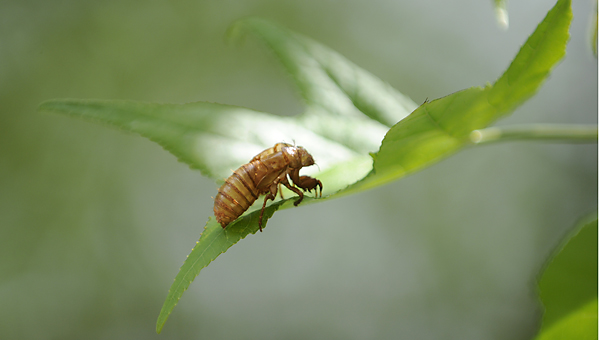 The shed skin left behind by a cicada clings to a leaf near the Mac Crenshaw Memorial Airport in Greenville. (Advocate Photo/Ashley Vansant)

They’re back. And it’s been quite a while since we’ve seen them-13 years to be exact.

The 13-year cicadas are swarming in Butler County this spring. With their large black bodies and bright red eyes, the flying insects are catching people’s eyes. But it’s the sounds made by the male 13-year cicadas-unusually loud and unceasing-that garner the most attention.

Cicadas certainly aren’t an uncommon sound or sight in south Alabama. Most people are familiar with the Tibicen or “annual” cicada (also known as the July fly and harvest fly) with its black eyes and patches of green. It’s the Tibicen males that sing the familiar song heard yearly during the long, sultry late summer days.

However, periodical cicadas only emerge once every 13 or 17 years, depending on the species. 13-year cicadas are found mostly in the south while 17-year cicadas are usually located in the north.

That peculiar sound made by the 13-year males is actually a mating song, Pinkston said.

“People also want to know where all these cicadas suddenly came from. Well, for most of their lives they are in the larvae stage where the eggs have been laid underground, and they stay underground feeding off tree roots,” Pinkston said.

If you’ve been worried about the current crop of red-eyed flying bugs, there’s no need to fret, said Pinkston.

“While they feed off tree roots as larvae, they really don’t do any damage. They don’t harm your crops, or bite or sting. And there’s no insecticide which will work on them, so people shouldn’t even try.”

The good news is the noisy nuisance won’t be long-term. “They aren’t around a long time,” Pinkston said.

“When we start seeing them, they are near the end of their life cycle-they have four weeks, maybe six at the most.”

And the bad news?

“Right now I am telling people they will just have to grin and bear it. Learn to enjoy the songs they sing,” he said.

After all, you won’t have to listen to these particular songs again until 2024.

For more information about cicadas, stop by the Butler County Extension Office on South Conecuh Street in Greenville or call 382-5111.