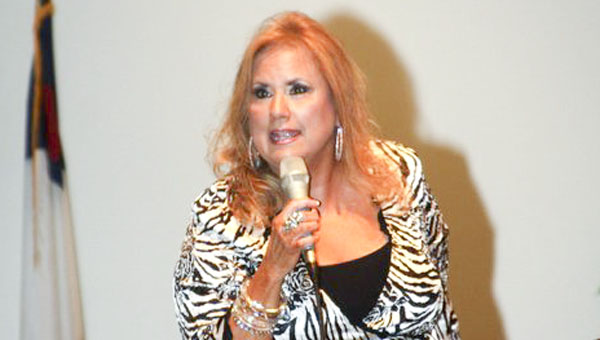 Joani Tabor was the keynote speaker for the conference.

By Nancy Williams Petrey
Special to the Journal

The theme was “Bubble Over With Joy,” and those attending did indeed bubble over with joy throughout the day.

This was no ordinary women’s conference. It was divinely inspired like no other, evidenced by the supernatural choice of a speaker only a few months before the event.

Ann Tate, chairman of the Steering Committee, was awakened in the night with the name Joani Tabor so strongly impressed on her mind that she immediately wrote Mrs. Tabor an e-mail.

She received a positive answer the next afternoon. Tabor’s busy schedule just so happened to have the requested date open, and the usual fees were set aside so that Mrs. Tabor could carry out her divine assignment in Crenshaw County.

Joani Tabor also spoke at First Baptist in Luverne on Sunday morning and back at South Luverne Baptist on Sunday night.

In light of the fact that Tabor has received accolades from Billy Graham and Nancy Reagan, national recognition and awards as a singer, has appeared at the White House, Crystal Cathedral, and over 100 television shows, and has ministered in over 30 countries and all 50 states, these three ministry events in Luverne showed the favor of God to our area.

As women entered the church that morning, they were encouraged to “bubble over with joy” by the outside and inside decorations.

Joy was everywhere – in flower arrangements, in an old wash tub, a doggie bathtub, in detergent bottles, and in bubble wrap on tables and even a manikin on stage.

The ladies really bubbled over with laughter when Joy Lou Glad made her appearance, blowing bubbles.

Music of praise and worship was the first thing on the program, led by Starla Jones from Georgiana, an outstanding vocalist in her own right.

She has a Master’s Degree in Vocal Performance and is Minister of Music at Mt. Pleasant Baptist Church, as well as an advanced math teacher at Fort Dale Academy in Greenville.

Having survived cancer twice, Jones was appearing without her wig for the first time.

Her tales of wearing wigs evoked gales of laughter, and her overcoming spirit also inspired the impromptu volunteer choir that completely filled the choir loft.

The choir’s rendition of “Majesty” and “How Great Thou Art” brought resounding applause from the happy crowd.

Unlike the past four conferences, this year there was a drama team of teen girls named “Overflowing,” who performed two songs in sign language.

A record number of door prizes, most of which were donated, were received eagerly.

The delicious lunch had been packed in boxes, decorated with bubble ribbons, by many volunteers.

Male volunteers did a great job serving lunch and cleaning up, so that not one woman had to miss the conference.

Refreshing fellowship took place mainly during the lunch hour, as women dined inside and outside the church, renewing friendships from past conferences and making new friends.

This was also the time to browse the sale tables for conference T-shirts, Starla Jones’ CDs, and Joani Tabor’s materials.

Tabor spoke in the morning and afternoon, and her messages and songs were both entertaining and deeply convicting. Many tears were shed.

She told of a decades-long prayer effort to heal a family relationship and the triumphant answer to her prayers.

Laughter filled the auditorium when she told how her God-inspired strategy with her husband resulted in Valentine’s Day never being forgotten again.

To conclude the conference, Tabor issued a bold challenge to the ladies by the power of the Holy Spirit to make things right in troubled relationships.

Many accepted the challenge to act, and others agreed to back them up in prayer.

Ann Tate said, “God uses a village to plan the conferences and make them happen. For every one of you who prayed, who came, who invited someone to come with you, who donated your time, your talent, your treasure… THANK YOU! May God bless you to overflowing… For every part of the day, we give all our praise and glory and honor to Jesus Christ, our sovereign Lord.”

The conference theme verse was surely realized: “May the God of hope fill you with all JOY and peace as you trust in Him, so that you may overflow with hope by the power of the Holy Spirit” (Rom. 15:13).