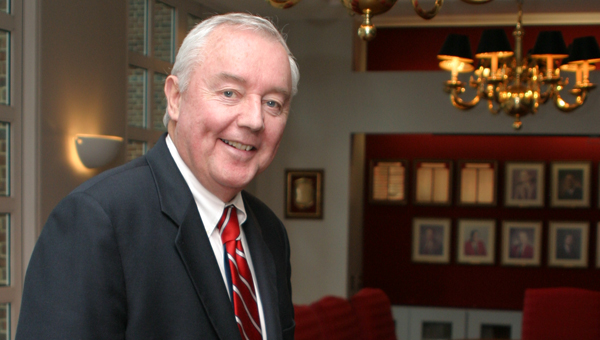 You can take the boy out of the small town, but the small town still lives on in the boy, even after he’s a grown man. Greenville native Pat Whetstone will tell you that.

“I still think about Greenville quite often. It is always going to be special to me,” he says.

Pat Whetstone has lived in various cities in various states over the course of his career. Since 1991, Whetstone has served as director of the University of Alabama’s Office of Alumni Affairs, a position he is about to pass on when he retires April 30.

He is also the executive secretary for the National Alumni Association, with close to 30,000 members spread across the nation.

He handles his duties with finesse, balance and a well-known sense of humor that has led his co-workers at the Capstone to refer to him as “a wonderful ambassador of the University of Alabama.”

And it all started in the Camellia City, where he grew up in a three-bedroom house on Gamble Street, a home he shared with six siblings and parents who taught and coached in the public school system.

“I guess everyone thinks this about their own childhood, but I really did grow up in a great time,” he recalled.

“So many of my male teachers had served in WWII and come back and found jobs teaching and coaching. These men had been through a lot. Several had stormed the beaches of Normandy. Now, that didn’t mean anything to me at the time, but now I realize what good role models they were for us. Coach Grantham, for example. He was fair and kind, but he also had high expectations of us.”

And it wasn’t just the male educators who made a lasting impact, Whetstone says.

“I was also taught by some great ladies like Harper Hartley and Bobbie Gamble, who just did a fantastic job with the plays at the school. We had some wonderful teachers at GHS.”

A recipient of the W.O. Parmer Scholarship, Whetstone admits he was not the most serious student in his early college days at Alabama.

“I was sort of like a preacher’s kid because of having my parents in the school system. You know how the preacher’s kid can’t get away with doing anything wrong without getting told on? Well, that was me when I was in high school. No cutting classes or stealing jerseys. So when I went to Alabama, let’s say I had a lot of fun,” Whetstone said.

However, a stint as an Army paratrooper for three years that postponed completion of his degree was a wake-up call for the economics major.

“I got a lot of personal discipline from my time in the service. I came back and realized college really wasn’t so hard if you just did it the right way. I guess you could say I grew up a bit,” Whetstone said.

After years working in the business sector, the opportunity in 1988 to come back to his alma mater to serve in the Alumni Fund Department also meant coming face-to-face with the same administrator he had gotten in trouble with during those early college years.

“Ah, yes, Dr. Blackburn. He was the dean of men when I attended school. Let’s say I ended up on the Dean’s List, but not the academic one,” he chuckled. “Later, I did make the academic Dean’s List, I am happy to say.”

In spite of his slightly checkered past, Whetstone got the job. Under his tenure as director, the alumni association has expanded considerably,

In his first year in the position, the total assets of the alumni association were less than $1 million.

“Today, we have more than $38 million in assets, mostly from scholarship endowments. This will certainly benefit my successor. When I came on board, we had a beautiful, brand-new alumni hall, which certainly benefited me. My predecessor built a campfire and I warmed myself by it. I like to think I’ve done the same for my successor,” Whetstone said.

While he plans to take continuing education courses in history at the university, Whetstone says he won’t be “hanging around” his former office once he retires.

“I will be available as a mentor, but you have to give your successor space and breathing room, just as I was given,” he said. He and wife Joyce have plans for a long Mediterranean cruise and he hopes to “put on Bermuda shorts and improve my golf game.”

“You get to participate in so many more activities in a small town. I played all the sports, I was SGA president-I think all that helps boost your self-confidence and self-esteem,” Whetstone said.

“You know it is important for students to have a high IQ, but it’s also important for them to have an ‘I will’ attitude, and I think coming from a place like Greenville really helps you develop that.”