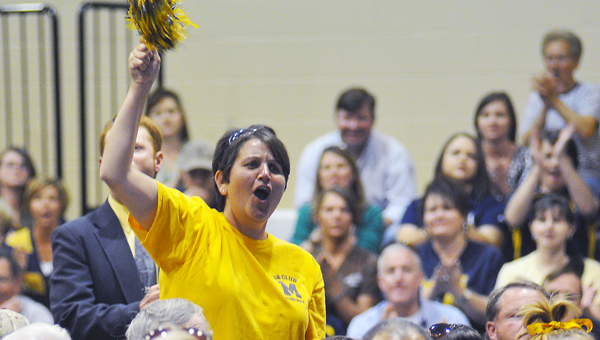 McKenzie parent Deborah Betterton waves her shaker during an address by McKenzie Principal Randy Williams to the Butler County Board of Education on Thursday night at Georgiana School. One of the options being considered by the BOE to make up for budget shortfalls is the closing of McKenzie School and consolidating it with Georgiana. (Advocate Staff, Kevin Pearcey)

Citizens of McKenzie donned their school colors and brought their signs to the Butler County Board of Education work session Thursday night in an effort to persuade the Board to keep their community school open.

An estimated crowd of more than 1,000 people crowded into the R.L. Austin Gymnasium on the Georgiana School campus to hear the options presented for finding the funds to make up the deficit currently found in the General Fund.

The BOE is now “looking under every rock,” said president Linda Hamilton, to find ways to come up with those needed funds in order to send the State Department concrete plans for making up the deficit by April 15.

Board member Joe Lisenby added another option to the list, a reduction of the board member stipend by 50 percent for a savings of $18,000 annually.

The last option, consolidation of McKenzie and Georgiana Schools, would save $151, 591.44 in operational costs and coaching supplements. With a reduction in workforce, the total savings would be $334,262.08.

The final option,the school consolidation, brought the greatest response from the audience, with an outcry of “no” resounding in the gymnasium. Three individuals-former BCSD CFO Sherry Bennett, McKenzie teacher Patty Cook and McKenzie principal Randy Williams—spoke on behalf of keeping the school open.

Bennett, saying the Georgiana School was already at capacity, questioned where the additional 300-plus students from McKenzie would be placed if consolidation took place.

“If we cut anything, let us look at cutting extra-curricular activities. Let them fund themselves. Allow us to keep our school.”

Williams said the entire school was working toward coming up with solutions to help the district save money.

Hamilton said the various options presented were just some of the possible solutions to their financial crisis the BOE will be considering in the coming days.

In a telephone interview on Friday, Douthitt said he was going through a list of cost-cutting suggestions sent in by students, and was heartened by their interest in helping McKenzie School and the District.

“We certainly will be looking into more options; we are not done yet. I am anticipating using several options-reduction in workforce, energy-saving measures and other things that will have an across-the-board effect on the system,” said Douthitt.

He said no dates and times had been set up yet but additional meetings could be expected in the near future.

“I was very pleased to see such a large turnout of people at the meeting. I think it was an excellent opportunity to educate the public on how a district is funded,” Douthitt said.

Williams said he was thrilled by the solidarity shown by the community of McKenzie at the work session and meeting.

“I felt like the support we had last night had to have an impact on the Board and their decision. I hope it weighs in our favor, of course,” Williams said.

“I know this is not over, but I do hope we will be the very last option to be considered, or not considered at all. Closing our school has never been a fix-all for the District’s finances. We really need to sit down and take a hard look at what the results and costs will be for a consolidation. I believe it could end up costing the District instead of saving it money.”

He said McKenzie School is already trying to be “part of the solution.”

“We’ve got the majority of lights turned off in the main building. Our goal is to save $2,000 a month on our light bill.”