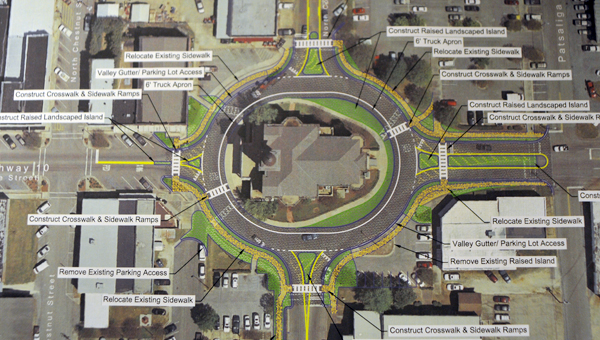 Planner's rendition of the roundabout at the Butler County Courthouse once all paving, striping and landscaping is complete.

Construction on the roundabout that circles the Butler County Courthouse is expected to be completed within the end of the month, weather permitting, according to ALDOT spokesperson Rebecca Leigh White.

One major modification has been made to the area: the yielding has been reversed.

“On the roundabout that was there before, traffic was directed opposite of how a roundabout usually works,” White said.

Once striping and final cleanup is complete, White said directional signage will be added to show the direction of travel flow.

This project began in mid-November of last year, and was let to APAC Mid-South Inc. in Birmingham for $846,000. It includes resurfacing and traffic striping on State Road 10 from east of Bolling Street to west of US 31.